The shocking report issued by the Senate Select Committee on Committee last week described in excruciating detail Senator John Ensign’s (R-NV) reprehensible conduct in sexually harassing a female employee and the lengths to which he went to cover up his wrong doing. The Ethics Committee investigation also revealed anti-women’s rights and so-called pro-family Senator Tom Coburn’s (R-OK) involvement and collaboration in the cover-up of Ensign’s affair. 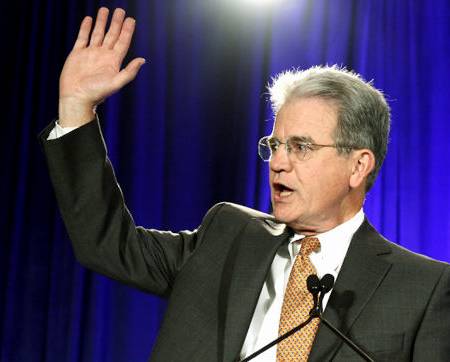 The Ethics Committee, chaired by Senator Barbara Boxer (D-CA) and Vice Chair Johnny Isakson (R-GA), released a report last Thursday, supported unanimously by the bipartisan committee of three Democrats and three Republicans, that former Nevada Senator John Ensign violated Senate rules, broke federal law, made false statements to the Federal Election Commission, and engaged in sex discrimination. According to the report, “there is substantial credible evidence that Senator Ensign discriminated on the basis of sex and engaged in improper conduct reflecting upon the Senate by terminating the Hamptons’ [Douglas Hampton, Ensign’s Chief of Staff, and his wife Cindy] employment because of the [sexual] affair” with Cindy.

It was unusual for the report to even have been issued as Ensign had already resigned from the Senate.  However, the Ethics Committee released the report with statements on the floor of the Senate by the Committee Chair Senator Barbara Boxer (D-CA) and Ranking Member Johnny Isakson (R-GA).  This action underscored the seriousness of Ensign’s actions.  Senator Boxer indicated that had Ensign not resigned in early May, he might have been one of the first senators to be expelled from the Senate in 150 years.

As I watched the Boxer and Isakson statements on C-Span with my co-workers at the Feminist Majority Foundation, I was pleased that the Ethics Committee had treated this investigation with the seriousness and transparency that it warranted.

But I can’t help but feel disappointed that the complaint filed against Senator Coburn was not handled with the same level of seriousness. Coburn became deeply involved with Ensign, even talking to the lawyers for the Hamptons on behalf of Ensign.  While he has denied that he was negotiating on behalf of Ensign for payments to the Hamptons, the Ethics Committee’s report on Ensign raises questions about this that need to be answered.  There has been speculation in the press that Coburn may be one of the individuals who received immunity for testifying in the Ensign investigation.  This question needs to be answered as well.