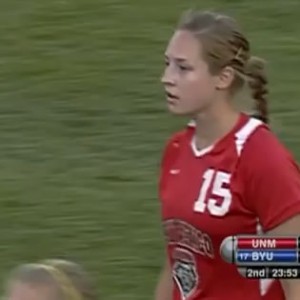 It was the ponytail pull seen ‘round the world.

University of New Mexico soccer player Elizabeth Lambert suddenly became the most famous woman in sports this past week, after a video of her aggressively punching and tripping her opponents, and ultimately throwing another player to the grass by her hair, went viral.

Lambert was suspended indefinitely from the team and made to grovel apologetically about her behavior—behavior that might very well be seen any day on any soccer pitch, especially enacted by a male player. But this was a woman acting in a way that fuzzed the boundary between bad sportsmanship and competitive zeal. As North Carolina’s famed women’s soccer coach Anson Dorrance put it, “It’s almost like [women] crossed a gender line they weren’t allowed to cross…”

When women do cross that line, people get nervous. Are women going to start emulating the bad parts of male competitive sports, such as excessive violence, drug use or outright cheating? Shouldn’t society protect women from such potential pitfalls? A look back into the last century of women’s sports history shows just how easily the doors to opportunity—which have been swinging wide since Title IX was established in 1972—can slam shut under the guise of such protection.

In the early 1920s, women’s sports in the U.S. were picking up quite a head of steam. Women began competing in basketball as early as 1895, and by 1902 it was “one of the principle methods of pastime and exercise,” noted Harper’s Weekly. By 1914, the Amateur Athletic Union admitted women into competitive programs and by 1920 numerous colleges sponsored women’s sports.

But in 1922, Mrs. Herbert Hoover —wife of the then-Secretary of Commerce and president-to-be, and herself president of the Girl Scouts—helped form the Women’s Division of the National Amateur Athletic Federation. “Play for play’s sake” was one of its mottos, and that meant eliminating “highly intense, specialized competition.” In other words, Girls, don’t play too hard, don’t fight to win—and don’t even sweat, if you can help it.

Instead of promoting interschool competition, the Women’s Division tried to block it. Real sporting challenges were considered too stressful for the delicate American Girl.

Some quickly realized that de-fanged competition would not attract more girls to sports, as had been expected, but less. A respondent to a 1930 survey conducted by the president of the American Physical Education Association confessed, “I believed without trying it out that intercollegiate athletics meant sports for the few with only the best participating. I find I was wrong. With an increasing intercollegiate program we have had an enormous increase in intramural and non-competitive sports…”

And then, people started worrying anew about the strenuous nature of sports for girls and women. In a 1979 piece in Psychology Today, the writer suggested that increased funding for women’s athletics had led to intensified competition. Horrors! Along with that, the writer believed, came the male ethos that “winning is everything.” And finally, “Organized athletics have become increasingly oriented toward the small group of women who are extremely talented and compete seriously …”

Have we ever heard such criticisms of men’s sports? Maybe the “winning is everything” philosophy is scrutinized, but not the idea of “intensified” competition nor the damage that a group of highly skilled male athletes could potentially wreak on the rank and file Sunday sportsman.

No, we don’t hear those criticisms about men because sports is a place where man “prove” their masculinity. Women athletes, however, are expected to prove their femininity offcourt (and recent collegiate sports media guides show just how far women are pushed to display their “feminine” side, which obviously entails a show of cleavage). As Mary Jo Kane, director of the Tucker Center for Research on Girls and Women in Sportsat the University of Minnesota told The New York Times recently. “I think women being physically aggressive and violent is, in many ways, the last boundary to break… In the broader social context, we don’t allow women to engage in that kind of behavior. There would be a pushback.”

Obviously there has been in the Lambert case. So we have to keep our ears open to the criticism, and while we can’t defend the young woman for nearly whiplashing her opponent—sports(wo)manship is a gender-blind value—we must certainly protect her right to play the game with the same gusto as men do.