Dozens of activists, leaders, and members of Congress joined Representative Rosa DeLauro (D-CT) and Feminist Majority President Eleanor Smeal this morning to speak out against the Trans-Pacific Partnership (TPP). 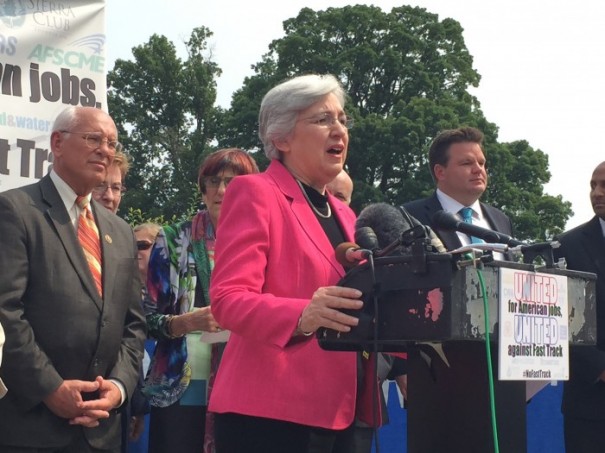 “Don’t be fooled. The Trans-Pacific Partnership is no deal for women. It hurts women workers and undermines women’s rights and human rights, while also threatening environmental regulations, availability of affordable medicines, food safety, and more,” said Eleanor Smeal, President of the Feminist Majority.

In a statement by the Feminist Majority this morning, Smeal said:

The proposed TPP is a sweeping NAFTA-like agreement between the U.S. and 11 other countries, including Brunei whose dictator – during TPP negotiations – imposed a new penal code calling for imprisonment of women who have abortions, and flogging or death by stoning for gay men and for anyone found guilty of adultery or extramarital sex. Instead of condemning the Sultan, the U.S. has continued to negotiate with Brunei, turning a blind-eye to the Sultan’s blatant disdain for women’s rights and international human rights law.

But that’s not all. The TPP, which has been negotiated in near secrecy, forces U.S. workers to compete with slave labor and poverty-wage workers. Malaysia, a TPP negotiating partner, is notorious for human trafficking, not only in the commercial sex industry, but also in its textile factories and agricultural industry. The U.S. should not reward Malaysia for permitting forced labor, and it should not kill U.S. jobs or threaten the wages of women workers here at home.

As part of the “fast track” deal, Congress has proposed Trade Adjustment Assistance for those pushed out of the workforce by TPP. The problem is that the TAA will be paid for by a $700 million cut to Medicare! We should not force vulnerable seniors – more than half of whom are women – to pay the price for more corporate profits.