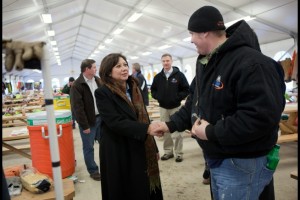 The Feminist Majority Foundation and Feminist Majority salute Secretary of Labor Hilda Solis, the first Latina to head a major federal agency, for her outstanding accomplishments in fighting for women workers and all workers. Solis’ leadership was especially important at a time when the United States was facing the worst recession since the Great Depression and women workers were, for the first time, roughly one-half of the nation’s paid workforce. She brought a unique Latina, feminist, environmentalist and union perspective to the Department. Secretary Solis made sure women workers were not forgotten as she worked to fight for and support policies to create more jobs. Never forgetting her own roots, she fought with passion for, believed in, and valued the common people and their struggles for advancement as well as the importance of the union movement for building the middle class.

Secretary Solis was always on the front lines fighting for women workers. She reinvigorated the Women’s Bureau, reached out to women’s organizations fighting to increase employment opportunities for women and expanded funding for community colleges that service millions of low-income women. In funding programs at community colleges, the Labor Department, as Solis has stated, expanded “employer-specific” job training for millions of people and “transformed” community colleges into an “engine of economic growth.”

Ms. Magazine heralded Secretary Solis’ appointment with a headline “New Sheriff in Town; the First Latina to Head Labor will Enforce Fair Treatment for all U.S. Workers.” She did exactly that. The Labor Department, under her leadership, enforced federal contract compliance regulations and wage and hour regulations protecting workers, especially women, people of color, low income individuals, and retirees. The Department Office of Federal Contract Compliance Programs conducted an impressive number of investigations and collected a record amount of back wages for workers who had been denied overtime and leave benefits as well as pay owed them by their employers. Moreover, the Labor Department under Solis recovered some $5 billion for retirees and their families.

Solis, a role model for equal employment, practiced what she preached. She recruited and hired women and people of color to top leadership positions in the Department, including her chief of staff, chief economists, and as leaders of top bureaus, agencies, and programs of the department. Solis, in very difficult times, revived and greatly strengthened the Department of Labor’s legacy for improving workers’ rights and economic justice. The Feminist Majority and Feminist Majority Foundation look forward to supporting her in new capacities as she continues her work and passion for working women and men as well as economic and social justice.