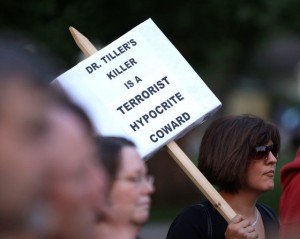 “Scott Roeder will spend the rest of his life in prison, but those who may have aided and abetted his murder of Dr. George Tiller are still walking free,” said Feminist Majority Foundation (FMF) President Eleanor Smeal. “There has been an escalation in violence, threats of violence and harassment at clinics in 14 states, and we fear where it will end if the network of those advocating violence is not brought to justice.”

According to trial testimony, Roeder has collaborated for over a decade with Army of God adherents, a web of violent extremists who actively promote the murder of doctors and other healthcare professionals who provide abortion services. Army of God follower Shelley Shannon was convicted of a 1994 attempt on the life of Dr. Tiller.  In addition, the Army of God claimed responsibility for numerous bombings of abortion clinics, including the bombing of a clinic in Alabama that killed a guard and badly maimed a nurse. Dr. Tiller was the ninth murder victim, with more than two dozen wounded, in domestic terrorism by anti-abortion extremists.  In each of these cases, only a lone perpetrator was charged and prosecuted, despite evidence of nationwide actions that amounted to aiding and abetting criminal activity.

“Doctors are being threatened at their clinics, stalked at their homes, and plastered on WANTED posters. There will be more victims unless the federal government acts swiftly,” said FMF Executive Vice President Katherine Spillar, an expert in clinic terrorism who leads the FMF’s National Clinic Access Project.

“It has been nearly a year since Dr. Tiller’s murder, yet no federal charges have been brought. It’s hard to believe that he acted entirely alone, and we urge Attorney General Eric Holder to vigorously pursue and prosecute those who may have advised or acted in concert with Scott Roeder. Until we stop the network of zealots who recruit, arm, conspire, advise, coordinate and support the Scott Roeders of their movement, the next murder is just around the corner,” said Spillar.

photo: Janet FitzGerald holds a sign during a May 31 candlelight vigil for Dr. George Tiller at a park in Lawrence, Kan. (Associated Press)

The Feminist Majority Foundation runs the National Clinic Access Project, which is the oldest and largest clinic defense project in the nation – researching and tracking extremist groups, organizing community support for clinics, providing safety assessments, sponsoring litigation to defend clinics, and working with law enforcement to stop violence against abortion providers.  Spillar attended the trial of Roeder in Wichita, Kansas, and leads the project.-