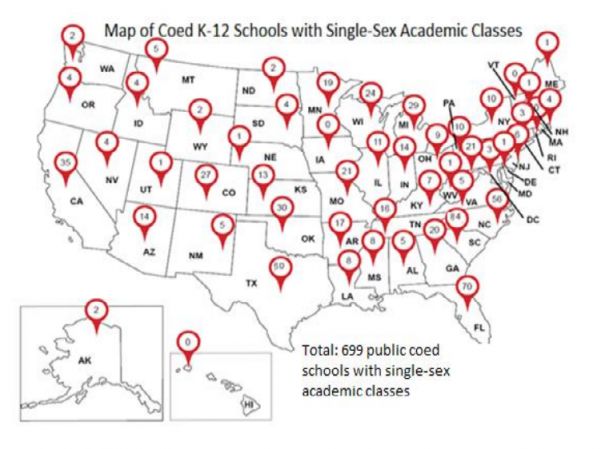 We found that instead of decreasing sex segregation, the number of public K-12 co-ed schools with single-sex academic classes and all-girls and all-boys schools have continued to increase since the 2006 Title IX regulation that made it easier to establish single-sex K-12 public education. The FMF together with the National Coalition for Women and Girls in Education requested that this 2006 regulation promulgated by the George W. Bush administration be rescinded.  Moreover, advocates have urged that the federal government issue guidance as to what justifications and procedures are essential to make sure that any deliberate sex segregation is in full compliance with Title IX, the US Constitution, and other civil rights laws.

This 2014 FMF study showing the continued increases in public school sex segregation is being released about the same time as the long awaited US Department of Education, Office for Civil Rights (OCR) guidance in the form of “Questions and Answers on Title IX and Single-Sex Elementary and Secondary Classes and Extracurricular Activities.”

“We are concerned that the numbers of single-sex K-12 public education programs are growing despite increased evidence that they are legally and educationally unsound,” says Sue Klein, Ed. D., Education Equity Director for the FMF. “While it does not rescind the 2006 Title IX regulation, this December 1, 2014 OCR guidance should help public K-12 schools using (or planning to use) deliberate sex segregation to understand that it is necessary to justify their sex segregation based on many critically important legal non-discrimination/equality principles,” continued Klein. Both FMF studies (“State of Public School Sex Segregation in the United States 2007-10” and “Identifying US K-12 Public Schools with Deliberate Sex Segregation“) revealed that many of these principles have been routinely violated by schools using deliberate sex segregation practices.

The Feminist Majority Foundation (FMF), founded in 1987, is a cutting edge organization dedicated to gender equality, reproductive health, and non-violence. The FMF’s Education Equity Program uses research and action to identify and eliminate sex discrimination in public education for the betterment of both girls and boys, women and men, and to strengthen Title IX and its infrastructure of required Title IX coordinators.