In a well-received speech at the City Club of Cleveland today, Katherine Spillar, Executive Director of the Feminist Majority Foundation urged Cleveland city officials to dramatically increase the hiring of women police officers as a way to decrease police brutality incidents. 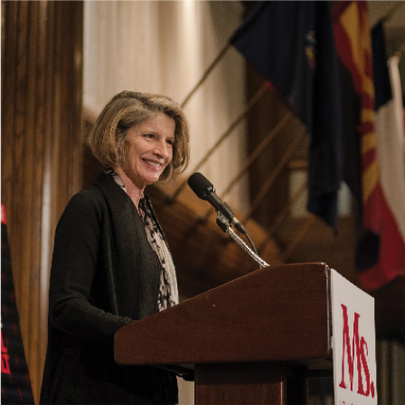 Following a number of high profile police killings in Cleveland of African Americans, and an eight-month investigation by the US Attorney’s office of the Northern District of Ohio, the City of Cleveland has now entered into a Consent Decree that requires numerous reforms in how the city oversees and investigates police operations, including training in use of force.

“Among the most important reforms mandated by the consent decree – and the most easily overlooked – are the changes the Cleveland Division of Police must make in its recruitment and hiring practices,” said Spillar.  “Why?  Because it provides Cleveland an unprecedented opportunity to dramatically increase the percentages of women in the police department. And to racially diversify the ranks of a department that is two-thirds white in a city that is two-thirds non-white.”

Spillar explained that racial diversity would ensure communities of color are full partners in a new community-oriented police department, and that gender balancing the department would bring a different kind of police officer to the CDP. “Studies over the past 40 years have shown that women officers are less authoritarian in their approach to policing and less reliant on physical force,” Spillar continued. “Most importantly, women officers have proven to be better at defusing potentially violent confrontations – before those encounters turn deadly. This is the very approach to policing that the US Attorney says is tragically missing in Cleveland.”

Spillar pointed to two reasons explaining the difference in women’s and men’s approach to policing.

“First, policemen see policing as use of force to gain compliance.  By contrast, women see policing as a public service.  Second, some research suggests that male police officers who feel like they must demonstrate their masculinity might be more likely to use force against a subject. We most recently saw this play out on the video-taped arrest of Sandra Bland in Texas. Her death in police custody is still unexplained.

“What’s more, women police are better at responding to domestic violence incidents, the largest category of 911 calls to police departments across the country, underscoring the need for more women in the department.”

Despite the evidence that increasing women in law enforcement would significantly reduce police violence, the number of women in policing nationwide remains stuck at low levels. Cleveland Division of Police has only 14.4% women in its ranks. According to Spillar, three major causes keep the numbers of women in policing artificially low: misguided recruiting practices, ongoing discriminatory hiring practices across the country, and hostile work places.

To increase the numbers of women in law enforcement Spillar argued police departments must adopt: a community policing philosophy over a warrior model that over-relies on use of force; an unrelenting and genuine commitment from the top of the department and from city leaders to hire more women officers; unbiased testing and hiring procedures; incentives for existing police officers to actively seek out and encourage women to apply; and serious enforcement of sexual harassment policies that keep women from being hazed and threatened out of the department.

“The most fundamental change a police agency can make is in hiring the right people – the right balance of people.  And it is the current imbalance – or gender gap – in policing that is contributing to the police excessive force problems in this city and cities across the country.

“Until now, the national conversation has ignored the benefits gender balancing would bring to the effectiveness of police departments and to the people in their communities.  With demands for police reform, we have a perfect opportunity to consider a dramatic, gender-based response.”

The Feminist Majority Foundation’s National Center for Women in Policing has long supported female officers and efforts to diversify police departments by sex, race, and ethnicity across the country. In the midst of a national conversation about police brutality, that work could mean the difference between life and death for those who interact with police.