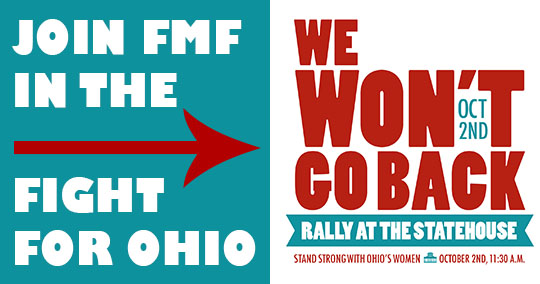 COLUMBUS – Angered by a string of attacks on women’s health care – including legislative efforts to require doctors to give false information to women patients – hundreds of people marched on the state capital Wednesday and vowed to defeat anti-woman legislation and the politicians who support them.

“Gov. (John) Kasich ran and won by promising jobs but Ohio is third from the bottom in creating jobs,’’ said Eleanor Smeal, who heads the Feminist Majority. “Once he got elected, he didn’t talk about jobs. He talked about controlling a woman’s uterus.’’

Other speakers echoed her comments and promised to continue fighting for the rights of women to have access to quality care and for doctors – not politicians – to decide what is best for patients.

“Women are not fooled by the hide-and-sneak tactics of John Kasich and his pals who want to push us back to the 1950s,’’ said Terry O’Neill, president of the National Organization for Women. “Make no mistake, the politicians who keep waging this outrageous war on women will pay a price at the polls next year.”

Smeal and O’Neill were among 10 speakers who addressed the 90-minute rally and urged attendees to make their opposition to the anti-woman legislation known, stand up for the rights of doctors and patients and consider changing Ohio’s political climate by running for office.

Stephanie Kight, President and CEO, Planned Parenthood Advocates of Ohio, said the laws put in place by Ohio politicians “hurt our most vulnerable women—like the gag order on rape crisis counselors. Our politicians have passed laws that are medically unnecessary and that are designed to reduce access to the care women need.’’

Sara Hutchinson, Domestic Program Director for Catholics for Choice, said Catholics won’t sit idly by while women’s lives are placed at risk. “There are 2 million Catholics in Ohio and only 15 are bishops,’’ she said.

Doctors and patients also spoke, with doctors complaining that they have been pushed aside while politicians legislate how doctors must practice medicine.

The rally comes as legislators return from their summer recess and prepare to debate legislation that would set Ohio back even father. Ohio already has some of the nation’s strictest anti-abortion laws and pending bills would require doctors to tell women there is a link between breast cancer and abortion when none exits and prosecute doctors who refuse to lie to patients.