The following is a statement by our Founder and President, Eleanor Smeal, on the events in Ferguson, Missouri.

The Feminist Majority Foundation calls for the appointment of a special prosecutor to conduct a thorough, unbiased investigation into the shooting death of unarmed African-American teenager Michael Brown by Ferguson, Missouri police officer Darren Wilson.

The killing of Michael Brown and the blundered, militarized response by law enforcement to the call for justice is a tragic reminder that in many African-American communities across the nation, the police themselves can be a threat. 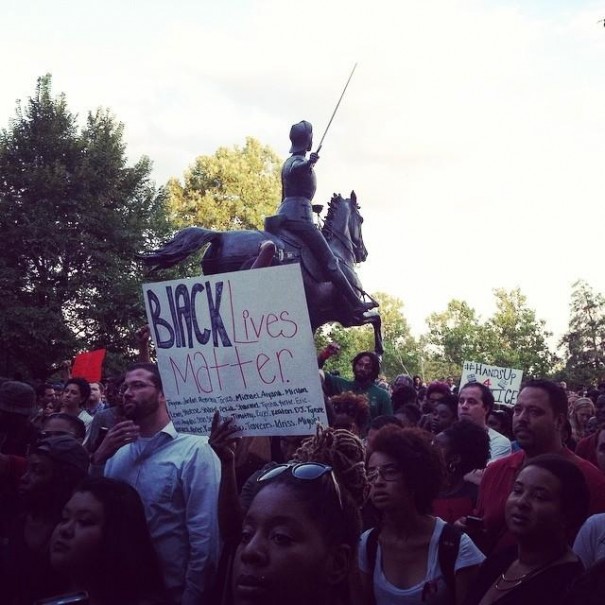 Given the distrust of the police by the local African-American community, the close ties between the St. Louis County Prosecuting Attorney Robert McCulloch and the police, and the fact that McCulloch has had no less than 5 close relatives who have worked on the local police force, the Feminist Majority Foundation calls on Governor Jay Nixon to reconsider his decision on appointing a special prosecutor to handle the criminal investigation.

Over the past 10 days, the African-American community in Ferguson has demanded answers. They’ve demanded justice. There is still no arrest. One man is dead and his shooter free. People want to know why. But until recently, the protesters in Ferguson, the vast majority of whom are peaceful, have been met with tear gas, armored vehicles, rubber and wooden bullets, and rifles.

Ferguson, Missouri at night has looked like a battlefield with militarized police and national guard troops, and guns pointed at protesters. It is not surprising that this show of excessive force has failed to build trust in law enforcement and has failed to de-escalate tensions in the community. In this environment, the Governor must appoint someone independent to perform the investigation into this tragic shooting.

The Feminist Majority Foundation also supports the call from African-American civil rights leaders, led by the Lawyers’ Committee for Civil Rights Under Law, for implementation of a long-term, comprehensive police reform agenda that includes, among other things, the demilitarization of state and local law enforcement and the promotion of community policing. We also demand that the police incident report be released.

Police should reflect the communities that they serve. Increasing the number of African-Americans in policing will go a long way in improving police response in communities of color. The sheer numbers tell the story in Ferguson. Although, African-Americans represent 67.4 percent of the population in Ferguson, Missouri, they made up 92.7 percent of arrests in 2013 alone.

Research conducted by the Feminist Majority Foundation’s National Center for Women and Policing also shows that increasing the number of women in policing reduces police brutality and the excessive use of force.

Make no mistake. Ferguson is not an isolated case. It represents a horrific pattern of discriminatory policing and excessive use of force against African-Americans in this country. As feminists, as advocates for racial justice and non-violence, we cannot rest until all people – no matter who they are – can enjoy the right to life, liberty, and justice.