Exactly 34 years ago today, the Convention on the Elimination of All Forms of Discrimination Against Women was signed by then-President Jimmy Carter. Unfortunately, the US has since failed to ratify CEDAW – also known as the “women’s treaty” – putting us in the company of Sudan, South Sudan, Somalia, Iran, and two small Pacific islands, Tonga and Palau.

The US Senate has the power to change that – and today is the perfect day to remind them. Take action now to urge your Senator to support the women’s treaty and make women’s human rights a national priority. 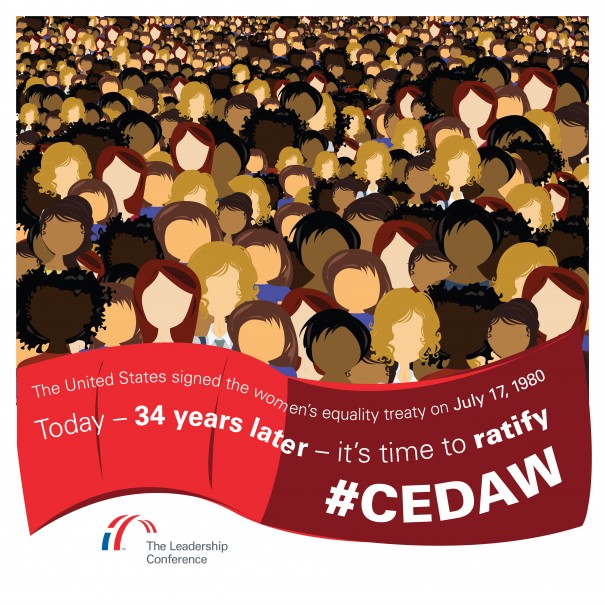 CEDAW is the only international human rights treaty focused on women’s rights, and was adopted by the United Nations in 1979.  CEDAW has since been used around the world to bolster efforts to advance the status of women and girls –  including the elimination of child marriage or forced marriage, improved maternal care, reduced violence against women and sex trafficking, and increased educational opportunities. If the US were to ratify the treaty, we would submit periodic reports on the progress of women and girls here at home to the UN CEDAW committee; those reports would highlight progress in the US as well as areas in which we continue to strive for gender equity. Ratification of CEDAW would also give the US an important tool to work with and support other nations in their efforts to end violence and discrimination against women.

It is time for the US to join the nations of the world in ratifying CEDAW and affirming the importance of equality for women and girls around the world. Take action for CEDAW today.