On Sunday, the Mirror’s People page published photos of the “domestic goddess” Nigella Lawson apparently being choked by her husband, Charles Saatchi, at Scott’s restaurant in London. Lawson was seen without her wedding ring following the incident, and left home with a suitcase. Nonetheless, she has declined to comment publicly and he brushed the incident off as a “tiff” to reporters:

“About a week ago, we were sitting outside a restaurant having an intense debate about the children, and I held Nigella’s neck repeatedly while attempting to emphasize my point. There was no grip, it was a playful tiff. The pictures are horrific but give a far more drastic and violent impression of what took place. Nigella’s tears were because we both hate arguing, not because she had been hurt. We had made up by the time we were home. The paparazzi were congregated outside our house after the story broke yesterday morning, so I told Nigella to take the kids off till the dust settled.”

Regardless, the photos came as a shock to many, perhaps because Lawson, who is a renowned television personality and food writer, is the latest piece of walking, talking proof that anyone can be a victim of domestic violence. 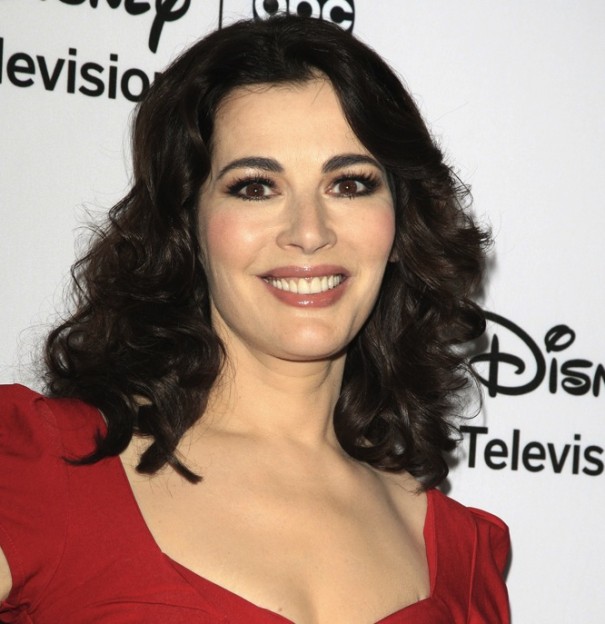 People often believe that domestic violence won’t or can’t happen to them. It can. Anyone can end up in a relationship in which intimate partner violence is prevalent which is scary in and of itself. As Mary Elizabeth Williams of Salon recently wrote, “what is known is that a woman who is beautiful, who is wealthy, who is successful, who is over the age of 50, can have a man reach out and grab her by the throat during an ‘intense’ debate just as easily as a woman who is poor or young or uneducated.” Indeed, the Guardian just published a roundtable showcasing the breadth of experiences women readers have had with domestic violence in their own lives and their own reactions to the publishing of these photos, as well as the fact that seemingly nobody in the restaurant desired to intervene in what appeared to be a violent and emotional confrontation between a man and a woman:

I felt shock and anger when I initially saw the photos of Nigella Lawson. At the act itself and the look on her face; at the fact that someone was taking a picture of it but doing nothing; and that no one at all intervened. I grew up with a violent stepfather and utterly despised him. I became very hard and almost had to parent my mother to protect her at a very young age. My stepfather knew not to push me too far, because given enough provocation, I would have at least tried to kill him. And he knew it. I am about to turn 42 and started my first “proper” relationship about 18 months ago (I only had flings with people I didn’t care about before), because of my fear of becoming a victim like my mum. I actually think that printing the photos is a pretty revolting thing to do, and pretty much as intrusive as it gets. I still can’t get over the fact that someone would rather have photographed it than helped her. Mind-blowing.

For me, I agree that the most jarring part of the entire situation is that Saatchi did all of this in public to almost no immediate alarm. Anyone who is part of the movement to end domestic violence will tell you that it is a scary day when a batterer will put their hands on you in public. The message inherent in public abuse is clear: an abuser no longer feels inclined to go to whatever lengths to hide their behavior. In a way, it’s arrogant. It relays the message that “no where is safe” to the victim because the abuse has escalated from being an issue they deal with inside of the home to an issue that can arise whenever, wherever. The fact that nobody intervened only sustained that message. The fact that we care more about photographic evidence than a human being’s safety sustains that message.