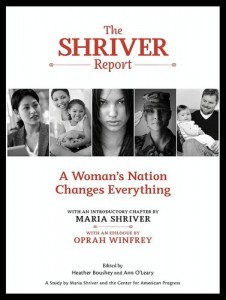 “Women hold up half the sky” is an old Chinese saying. The contemporary American version is this: Women for the first time in U.S. history constitute half of the nation’s paid labor force. The significant changes this development implies for American society—culturally as well as economically—are detailed in The Shriver Report: A Woman’s Nation Changes Everything, a new study by Maria Shriver in conjunction with scholars at the Center for American Progress (CAP), a Washington think tank.

Women’s equal representation among paid workers has profound consequences. But as The Shriver Report makes clear, neither public policies nor private businesses have done much to reflect the changing realities in Americans’ lives. Indeed, at a recent CAP event in Washington, D.C., unveiling the study, it was somewhat demoralizing to hear speakers calling for the very same changes that feminists have demanded for years: affordable quality childcare, flexible work hours, paid family leave and equal pay.
The glacial pace of progress on these items—women’s wage parity has only risen from 59 cents on the male dollar to 77 cents in the past three-plus decades—shows the necessity of reconstituting a “paycheck feminism,” as authors Karen Kornbluh and Rachel Horner have put it in the fall issue of Ms. They show how the assumptions around which Americans’ social and economic lives are organized are still stuck in the New Deal of the 1930s.

As important as the Social Security Act and other programs of the New Deal have been in providing many Americans with economic security, these policies were highly gendered. They presumed a male breadwinner and his dependent wife, so safety net features such as Social Security benefits were designed to favor those with steady fulltime paid work—something much harder to achieve for women with caregiving responsibilities. Moreover, while labor laws made provisions for full-time workers to be paid for overtime, no such provisions were made for flexible-hour workers, while part-time employees lose out on many potential benefits.

The better news in The Shriver Report is that both men and women agree that women’s increasing participation in the paid workforce is a good thing. As Michael Kimmel, a pioneer in “masculinity studies,” put it at the CAP event, in contrast to the media’s love affair with angry men resentful of women’s progress, most American men “have quietly accommodated themselves” to the new realities of work and family. Kimmel’s observations are backed up by a recent Time magazine poll which found that 76 percent of men and 80 percent of women view the new labor force composition as positive.

This greater acceptance on the part of men to women’s full-time work is no doubt a combination of raised consciousness and economic necessity. Most of the job losses in the current recession have been suffered by men, and even before the present crisis most American families had not been able to make ends meet on one paycheck. Consequentially, men are doing more childcare and housework than before—but still not as much as women do.

The Shriver Report comes at a time when the Obama administration, with respect to domestic issues, is focused laser-like on health-care reform, an issue of obviously great concern to all Americans, whether employed or not. The public endorsement of Shriver’s report on Meet the Press by Valerie Jarrett, a top adviser to Obama and head of his newly created White House Council on Women and Girls, is an encouraging sign that this Administration takes the policy demands of the report seriously. But how soon these necessary changes might occur is simply not clear. The arms of American women “holding up half the sky” are getting sore.