Afghanistan marked the International Day for the Elimination of Violence Against Women and begun participating in the worldwide 16 Days of Activism Against Gender-Based Violence, which is being called in Afghanistan “Peace from Home to the World.” During the launch day’s event, which was attended by government officials, including First Lady Rula Ghani and women’s rights activists, speakers expressed their commitment to ending violence against women. 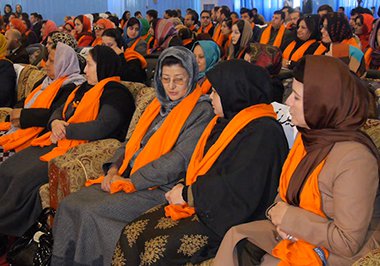 First Lady, Rula Ghani gave a speech on ending violence against women and supporting women by stating that “war often leads society towards violence and this violence is in violation of human dignity. Women who have raised generations should be provided with a safe environment in which to live.”

Ahmad Zia Massoud, the special envoy to President Ashraf Ghani, also pointed that violence against women in Afghanistan is a serious problem and obstacles in securing women’s rights must be removed. “All of us should remove obstacles to secure women’s right. Groups that want to use violence as a tool for their personal interest are horribly misguided.”

President Ghani’s message was read by presidential adviser, Malalai Shinwari, “the recent incident of a woman being stoned to death and the incident of a Ghor woman being lashed to death for running away from home shows graphically that we must fight violence against women.”

The Minister of Women’s Affairs Dilbar Nazari and other delegates said that although there had been some improvement in the country during the tenure of the past government and the current government, the problem of violence against women is very serious and instead of just issuing statements, government must take practical steps. “Currently there are cases of violence registered in Kabul and big violations in the provinces.” She continued on the positive note saying “there are many women seeking justice for women victims.” In other words, a large Afghan women’s movement is seeking an end to violence against women and growing in numbers and influence.

One of the participants told TOLO News that, “what is important today is our officials showed their commitment to the fight against violence against women, which hopefully will decrease in the country.” Other delegates argued that the National Unity Government needs to support women during this sixteen day period and put an end to the problem.