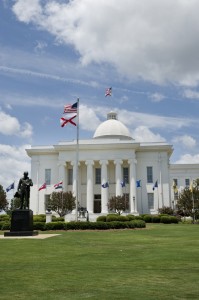 On Tuesday, Alabama Governor Robert Bentley signed a TRAP (Targeted Regulation of Abortion Providers) bill into law that will go into effect July 1, 2013. The bill, coined the Women’s Health and Safety Act, will require an Alabama-licensed physician be present at every abortion and will require these doctors to have admitting privileges to local hospitals. Further, the bill mandates that the name of the father be reported to authorities if the woman seeking an abortion is under the age of 16. The bill also sets stricter building requirements which would force costly renovations, including wider halls and doors and state of the art fire suppression systems.

While the Governor insisted that the measure “provides appropriate standards of care [and] has been endorsed by pro-life groups across Alabama,” Planned Parenthood warned that there will be imminent legal challenges.

The new law now requires clinics to maintain the standards of an ambulatory surgical center. As a result, the state’s four licensed abortion clinics would drastically have to remodel in order to stay open. “It puts an undue burden on existing facilities. All of this makes it harder to access health care,” Staci Fox of Planned Parenthood said. The clinics will have 180 days to meet the new requirements before they go into effect July 1st of this year.

Currently, the majority of clinics in Alabama have doctors who travel from out of state perform procedures. These doctors partner with local doctors with admitting privileges to provide necessary follow-up care. With the new measure, the doctors themselves must have the admitting privileges, severely limiting the ability of the current doctors to continue performing abortions in the state.

State Capitol of Alabama, in Montgomery,Alabama from Shutterstock