First in a series on escalating abortion clinic violence in the aftermath of Dr. George Tiller’s murder 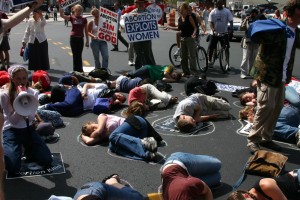 “In the old days, at least we knew what they were up to. If they were blockading us or firebombing us, we knew it. This is more insidious, more like a stealth strategy. And it is making life a living hell for the providers.”

The speaker is Susan Hill, president of the National Women’s Health Organization, the owner of several abortion clinics, mainly in the South. She is telling Ms. about a newly aggressive legal campaign on the part of the antiabortion movement. Though abortion rights and antiabortion forces have long faced each other in court, recently the latter have focused on directly suing the cities in which abortion facilities are located, often naming the local police chief as a defendant and sometimes individual police officers as well. This is particularly troubling to abortion providers as extremist actions are escalating in the wake of the murder of Kansas abortion doctor George Tiller in May, hence the need for more police protection, not less.

Hill, who started her career in abortion provision shortly after Roe v Wade in 1973, is no stranger to the worst excesses of the anti-abortion movement. David Gunn, the first abortion doctor murdered by an anti-abortion extremist, worked at one of her clinics. She herself has been subjected to numerous threats and harassment at her clinics as well as her home. But these legal actions, typically brought by religious-right affiliated organizations, such as the Alliance Defense Fund and the Thomas More Law Center, are extremely worrisome. Lawsuits, or even threatened lawsuits, against cities and police departments, typically charging interference with free speech, can often result in diminished police protection at the clinics—a crucial loss for the beleaguered abortion provider community.

The cash settlements that antiabortion protesters have been able to win in some instances have been particularly galling to providers, and no doubt sobering to cash-strapped local city governments. Consider the case of the Jackson Women’s Health Organization in Mississippi, a clinic owned by Hill. For years, this clinic—the last remaining in the state—has been a particular target of anti-abortion forces, given the powerful symbolism that would result should it be closed down. A few years ago a threat by Operation Save America to storm the “Gates of Hell in Jackson” for a series of protests, as the organization’s website put it, did not result in the thousands of participants the organization had promised. Only about one hundred materialized, and local police were out in force, keeping order.

The clinic staff breathed a collective sigh of relief.

Subsequently, however, Pro-Life Mississippi, which had been part of the protests, sued the city of Jackson and the Jackson police department, including the chief and several individual officers who had been on duty during the protests. Ultimately, this litigation resulted in a consent decree between the city and the plaintiffs, in which the city agreed to “not engage in any act or practice that has the purpose…of inhibiting the exercise of any person’s First Amendment rights, and to “enforce the laws, statues or ordinances in an even-handed manner, not favoring or disfavoring any person or group because of his or its political, religious philosophical positions on any issue.”

On the surface, these may seem perfectly reasonable positions. Abortion rights supporters believe in First Amendment rights. But the consent decree also calls for payments of $5,000 each to several individuals and to Pro-Life Mississippi, the expunging of criminal records of those arrested during the protests, a return of fines that were imposed because of illegal behavior of the protesters and a dismissal of all pending charges.

The Jackson case is not the only one that has resulted in cash awards to antiabortion protesters. The city of Detroit paid $48,000 after being sued for confiscating signs of protesters and Bellevue, Neb., paid out $125,000. In Allentown, Pennsylvania, demonstrators won $130,000 from the city on a longstanding dispute over permits to demonstrate against the local clinic. Inevitably, these cash settlements, and the consent decrees themselves, have a chilling effect on police behavior in the affected cities and elsewhere. “Many local police departments are paralyzed,” says Katherine Spillar, executive vice president of the Feminist Majority Foundation.

Though deeply concerned about this ramped up legal assault, Hill does remain positive about one thing—the changing consciousness of her patients with respect to protestors; “The women who come to our clinics used to be scared and intimidated by them. Now they are angry.”