President Taft discovered today that suffragists can sometimes be a tough audience.

He came to greet the delegates to the National American Woman Suffrage Association convention, and though he was given a standing ovation as he entered the room, as well as at the end of his speech, the President was hissed at at one point by some listeners.

Taft said that he had been a bit unsure whether to come to the convention, since his views are not entirely in harmony with N.A.W.S.A., “but I consider that the movement represents a sufficient part of the intelligence of the community to justify my coming here and welcoming you to Washington.” He said that he was “always more impatient with those who go only half way with me than those who oppose me,” so he must have known that there might be a rough spot ahead.

He said that he was a strong and “orthodox” advocate of woman suffrage when he was in high school, and that his father favored it as well. Needless to say, this caused great cheers from the audience, accompanied by the waving of white handkerchiefs. But next he did something odd for a politician by telling his audience something different from what he knew they would want to hear. He said that actual experience had modified his enthusiasm. Though woman suffrage seemed to work reasonably well in sparsely populated Western States, that might not be the case if it was won in densely-populated Eastern States:

“If I could be sure that women as a class would exercise the franchise, I would be in favor of it. At present time there exists in my mind considerable doubt.” 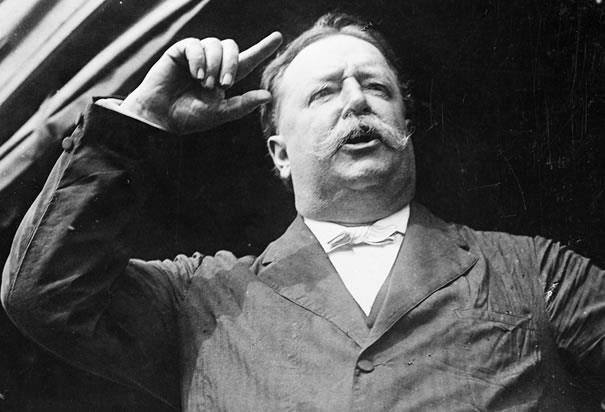 He said his hesitation about endorsing universal woman suffrage had to do with the possibility that the vote would not be exercised by the vast majority of women, but used only by “that part of the class least desirable as political constituents and may be neglected by many of those who are intelligent and patriotic and would be most desirable as members of the electorate.”

That brought out the hisses, and a retort by the President: “Now, my dear ladies, you must show yourselves equal to self-government by exercising in listening to opposing arguments that degree of restraint without which successful self-government is impossible.”

The rest of the speech went smoothly, and after being given a hearty round of applause as he finished speaking, he assured a somewhat embarrassed Rev. Anna Howard Shaw, President of N.A.W.S.A., that his feelings had not been injured in the least by the brief incident of hissing.

Senator Robert Owen, Democrat of Oklahoma, America’s newest and 46th State, followed the President. His remarks were enthusiastically received by the audience. He endorsed the suffrage movement “without apology,” and told the cheering crowd: “I face the prejudice of men of ten thousand years in advocating suffrage for women. Even if the entire race of men contradicts me, I still assert that woman is entitled to life, liberty, and the pursuit of happiness.”

Following the speeches, Dr. Shaw announced that there would be an open-air suffrage demonstration tomorrow, with Harriot Stanton Blatch in charge. Considering the large number of delegates who are here at the convention from all around the country, it should certainly impress upon Congress the growing power and new militance of this almost 62-year-old movement.