It was announced today that a list of New York City law firms which hire women is being prepared by Kappa Beta Pi, a legal sorority, so female graduates of law schools will not have to waste their time applying to local firms that will automatically reject their applications. 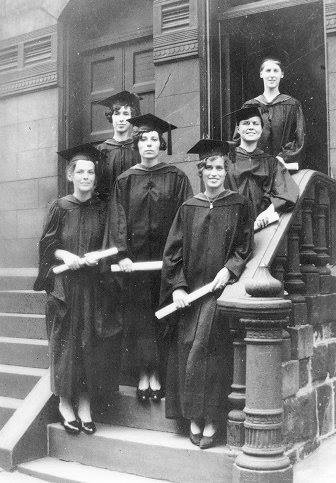 Emily Marx, Secretary of the sorority’s New York Chapter said: “We are cataloging the city’s law firms where embryo Portias are welcome on the same terms as their fellows. It is hoped that graduates with good scholastic records will thus be saved weeks of weary job hunting.”

Marx’s project will be extremely valuable to the new graduates, who won’t have to repeat her experience. When she canvassed 175 law firms while looking for a job after graduation, all but 25 said they didn’t want a woman lawyer in the office, and though the rest held out some hope, they had no vacancies.

Marx’s first interview was with the somewhat bemused senior partner of a well-known law firm who was quite astonished to see a woman applying for a job. But she was encouraged when he said that he would never want to be accused of turning down a Yale graduate who was a member of the Law Review just because she was a woman. After consulting with the other senior partner, however, he came back and told her: “No girls.”

After weeks of similar rejections, Marx did finally get hired, and says that there are more such open-minded law offices in New York, but women need to know which ones they are.

There are about 35 chapters of Kappa Beta Pi, mostly in the West, because many Eastern law schools do not admit women. About 250 members now hold positions in New York City law firms, but the problem is to find work for the 100 new graduates who come to the city looking for jobs each year. Kappa Beta Pi was the first legal sorority, founded in 1908 at the Chicago-Kent College of Law to promote high standards among women law students and practicing attorneys.

The number of women lawyers has been increasing rapidly, though they still constitute a small percentage of the profession. According to the 1870 Census, only five women were actively practicing law at that time. By 1900 that number had increased to 1,010, and stood at 1,738 as of the latest Census in 1920. Hopefully, projects similar to the one outlined today will be tried in other cities as well, and will help that number continue to increase in the future.