Today was a busy one for the National American Woman Suffrage Association.

Before the morning was over, convention delegates re-elected Rev. Anna Howard Shaw as their leader, and had begun a procession of almost 50 automobiles to Capitol Hill.

The motorized parade carried petitions signed by over 404,000 citizens who want the Susan B. Anthony (nationwide woman suffrage) Amendment passed by Congress then sent to the 46 States for ratification. Approval by 3/4 (35) would make the Anthony Amendment the 16th Amendment to the U.S. Constitution (unless the Income Tax Amendment, already submitted to the States on July 12th of last year is ratified first, in which case the Anthony Amendment would become the 17th Amendment.)

The caravan got off to a bit of a late start due to a change of plans. Originally, the petitions were all together in one huge and quite impressive roll in a large express wagon. But at the last minute it was decided to unroll them and divide them up so that each State leader could arrive with the petitions from her State. It took about a half hour to do this, but once that was accomplished, a wonderfully colorful procession of automobiles and taxicabs began to roll down Pennsylvania Avenue, each carrying a banner from one of the States, with other cars for NAWSA officers. 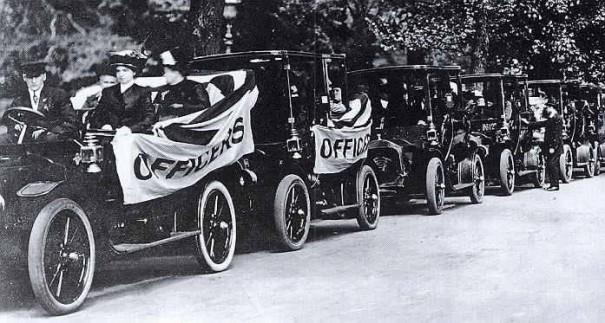 After being given a warm reception at the Capitol steps, the petitioners then descended on Congress, making sure each member was given a petition from his District or State, and was then urged to officially present that petition to Congress. Everyone went into the galleries to see who would follow through on this request. A number of members of both House and Senate did as they had been asked, but the enthusiastic reaction to the speeches presenting the petitions almost got the NAWSA members booted out of the Senate.

The most popular presentation was made by Senator Robert “Fighting Bob” LaFollette, Republican of Wisconsin, who said he hoped Congress would bring the ballot “into the hands of an intelligent part of our citizenship that should have received it long ago.” This caused an understandable burst of cheers from the gallery, so Senator John Kean, Republican of New Jersey, who was presiding, called for order.

Decorum lasted until Senator Moses Clapp, Republican of Minnesota, made his presentation. His speech sparked a well-deserved round of applause, to which Senator Kean responded: “No applause allowed in the United States Senate.” Three applauders laughed, and then Senator Kean said: “If there is a repetition, the Sergeant-At-Arms will be ordered to clear the galleries.” Not wanting to miss any of the kind words of supportive Senators, everyone in the galleries then quietly enjoyed hearing the cause promoted on the Senate floor.

In the House, no speeches were permitted during the presentation of petitions, but visitors were allowed to applaud as each pro-suffrage member went up to the Speaker’s desk to deposit his petition. The largest number of signatures, 72,000, came from New York, with Utah, an equal-suffrage State, contributing the next-highest total of 40,000.

Today was the culmination of a year-long effort to gather signatures by NAWSA’s State chapters. Some of the more prosperous ones would rent out booth space at county fairs and other events, while in other States, NAWSA members would simply walk around soliciting signatures from crowds at various public events.

It is hoped that this presentation will be enough to get the Anthony Amendment out of Congressional Committees, where it has been bottled up for the past 14 years. Tomorrow, “Votes for Women” advocates will appear before the Senate Committee on Woman Suffrage and the House Committee on the Judiciary to make the case for nationwide woman suffrage.

Though no State has been won for suffrage since Idaho in 1896, the fact that President Taft personally greeted the NAWSA convention delegates this year, the launching of massive, nationwide petition drives, the emergence of new and energetic organizations such as Harriot Stanton Blatch’s “Equality League of Self-Supporting Women,” and the use of public spectacles, such as the League’s suffrage parade in New York City planned for May 21st are clear proof that the movement has been revitalized, and that new victories to match this new enthusiasm should soon follow.