Though this is the fifth annual national convention of the League of Women Voters, it’s the first one to be held in a Presidential election year since women won the vote nationwide on August 26, 1920, so it’s an especially exciting one.

Since women in all States can now make their influence felt at the ballot box on the same basis as men, the League takes stands on all the important issues of the day, and enforcement of the Prohibition law continues to be one of them. Of course, the fight here was only over how strong and explicit to make the League’s statement of its unwavering support for the nation’s four-year-old “Noble Experiment,” something the group’s founder, Carrie Chapman Catt, actively supports.

An early draft of this year’s Prohibition resolution simply called for “bringing about respect for the law by cooperation and active work for law enforcement” with no specific reference to the Prohibition amendment. But after a stirring speech by Cornelia Bryce Pinchot and intense lobbying by the Pennsylvania delegation, the final resolution said: “Laxity in the enforcement of the Eighteenth Amendment to the Constitution is not only a scandal and dishonor to our nation, but tends to weaken the regard for law in general.” 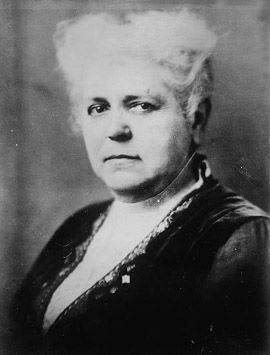 Mary Garrett Hay, who led the New York City branch of the Woman Suffrage Party in 1917, when women won the vote in a Statewide referendum, chose to look to the future and not the past. With both major parties holding national conventions this summer, her speech contained some advice that will clearly be just as valid in decades to come as it is today:

Don’t take what the men hand out to you. Take for yourselves the kind of things you want in the platforms and tell the men so. Keep your backbone at the conventions. When they want your vote for a candidate of whom you don’t approve, don’t give it, even for a unit vote. Let the men see that women are going to help to lead them to the right kind of platforms and the right kind of candidates.

Though the decades-long national battles over both Prohibition and woman suffrage have now finally been settled once and for all by the 18th and 19th Amendments, there are still some issues that provoke fierce debate around the country, and the controversy over birth control certainly brought out strong feelings here. After intense arguments were made on both sides of the issue, it was decided that the L.W.V. would not yet take a stand, but that each State chapter is free to do so. The League rejected a proposal to endorse a Constitutional amendment giving Congress the power to regulate marriage and divorce laws, but it did go on record as favoring America’s entry into the Permanent Court of International Justice.

Four years of nationwide woman suffrage have not yet resulted in a utopian society, but they have certainly proven that the predictions of anti-suffragists that disastrous social consequences would inevitably follow if women won the vote were, in fact, just as ridiculous as they sounded at the time they were made.

Though it took 72 years to win the vote, 44 months after that victory, women are already a substantial and well-informed portion of the electorate, with voter registration and voter education programs by the League of Women Voters certainly deserving a share of the credit for that advance.

Women cannot as yet claim credit for electing a President, because Harding won a majority of both men’s and women’s votes in the 1920 election. But it’s still far too soon to know whether similar voting patterns will be the exception or the rule. Should women begin to vote differently from men, politics could still become as radically changed as anti-suffragists feared and suffragists hoped. So, a society in which men and women have equal rights, responsibilities and opportunities, as envisioned 76 years ago at Seneca Falls, may yet be established thanks to the work of those pioneer suffragists.