Just five weeks after overcoming the riotous conditions which beset their parade and pageant on March 3rd, suffragists from all around the nation were back in Washington, DC, today, for another impressive event demanding a Constitutional amendment enfranchising women nationwide. 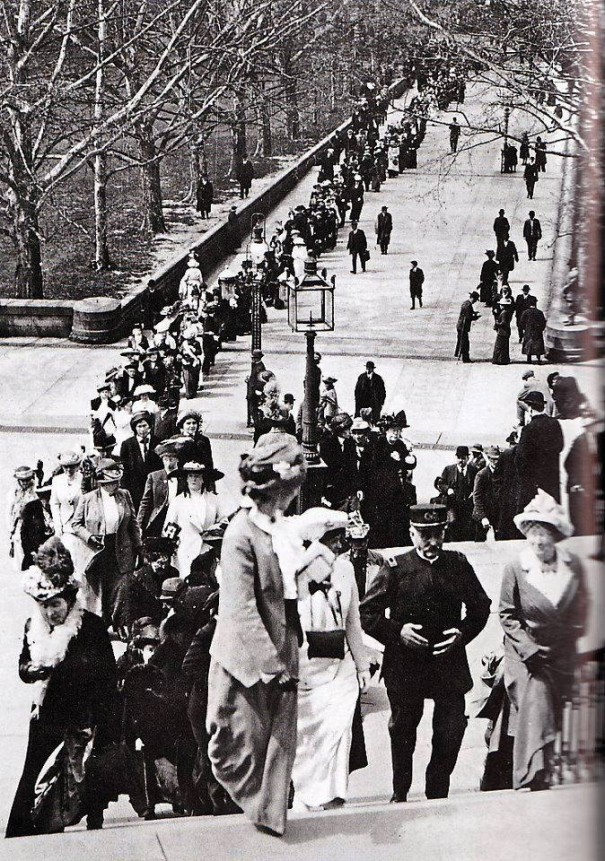 Though this event was only about one-tenth the size of the previous one, and consisted of only 531 “Votes for Women” advocates, that number was appropriate to the event’s purpose. Since each State has two Senators, there were two marchers from each of the 48 States, plus one from each of the nation’s 435 Congressional Districts. It was the largest delegation of suffragists ever to call on Congress.

After being given a welcoming speech on the Capitol steps by a U.S. Senator, they entered the Capitol, where they were greeted by Representative James W. Bryan (Progressive Party, Washington State). Bryan said that “there were enough men in the Senate and House to make certain that the flag of woman suffrage never would be pulled down in the United States.”

The delegation then filed into the Rotunda, where nine Senators and an equal number of Representatives from the nine States where women already vote received them. Those Members of Congress shook hands with each of the women as they dropped their petitions into a box specially prepared for the occasion, putting one petition in the box for each Member of the House and Senate. The women then went to the galleries, where they could see the suffrage amendment resolutions introduced on the floor by Senator George Chamberlain, Democrat of Oregon, and Representative Frank Mondell, Republican of Wyoming.

The day began with a large meeting in the Columbia Theater, in which rousing speeches were made by well-known suffragists such as Alice Paul, Harriet Burton Laidlaw, Beatrice Forbes-Robertson Hale, and Janet Richards. Those present for the event, which was organized by Alice Paul and her National American Woman Suffrage Association Congressional Committee, then took to the streets. Led by two marching bands, there was no trouble this time as they made their way from the theater to the Capitol accompanied by adequate police protection, something totally lacking 35 days ago.