Even for Amelia Earhart, this has been quite an adventurous day.

Not only did she set an altitude record that was until now held by a man, she broke her own record a few hours later, and did it all in an unusual type of aircraft. No one had ever taken an autogyro to 18,000 feet, but today she did so twice, the second time soaring to 18,415 feet.

Though fixed-wing aircraft have been around for almost 30 years, this new type was only invented in 1923. It uses a standard engine and propeller on the front for forward thrust, but instead of just two wings on the side, it also has four unpowered wings above, which rotate to provide lift as the craft moves forward through the air. 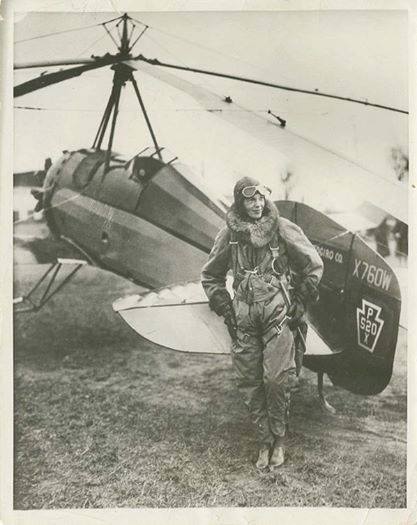 Earhart arrived at Pitcairn Aviation Field, near Willow Grove, Pennsylvania, this morning with George Palmer Putnam, her husband of just under eight weeks, and Major Luke Christopher, representing the National Aeronautical Association, who would be an official witness to any record she might set.

She first went aloft at 12:03, slowly gaining altitude for an hour and a half. When she knew she could go no higher, she cut the engine, then descended using only the power of the rotating blades overhead to slow her fall. She described the quiet descent as a “novel sensation.”

Though one record-setting flight would have been enough to make most pilots call it a day, Earhart seemed unsatisfied with the aircraft’s performance, due to a problem with the gas feed line. She told the crowd of 500: “I think I can do better than that in this plane and I’m going to try some time in the near future.”

The future turned out to be quite near, and she went up again at 4:20, this time going almost 500 feet higher, according to the barograph she carried. This instrument measures atmospheric pressure, and can therefore give an accurate reading of altitude since air pressure decreases with height.

The previous autogyro record was set by Jim Faulkner, a test pilot for Pitcairn Aviation, Incorporated. The altitude record for women in conventional aircraft is 28,773 feet, set by Ruth Nichols last month. The highest any airplane has flown is 43,168 feet, that record set by Lt. Apollo Soucek on June 4, 1930, though Captain Hawthorne C. Gray achieved 43,380 feet in a helium balloon on November 4, 1927.

Earhart set her first women’s altitude record in 1922, just a year after learning to fly, and was the first woman to cross the Atlantic, which she did as a passenger in 1928. She became the first woman to fly a plane across the country later that year, and set a woman’s speed record of 181 miles per hour last July.

Since she’s always eager to try new things, and is never satisfied until she gets the maximum performance out of any aircraft she flies, there should be many more records and adventures in her future.