An American woman has now joined the ranks of licensed aeroplane pilots!

Early this morning, Harriet Quimby earned License #37 from the Aero Club of America, an affiliate of the Federation Aeronautique Internationale. This is the first license the Aero Club has issued to a female pilot in its six-year history. Few other women in the world have been licensed to fly, Raymonde de Laroche being the first of six European women who presently hold licenses there. She ended the male monopoly on pilot’s licenses on March 8, 1910.

Getting officially licensed anywhere is not an easy task, and even Quimby had to make two attempts. Late yesterday she successfully performed the required series of figure eights around the designated course, but upon landing didn’t shut off her engine quickly enough and came to a stop 40 feet past the allotted 160 feet from her mark. Undeterred, she said that she would be back on the field at 4:30 the next morning to try again, and Aero Club officials agreed to be there. 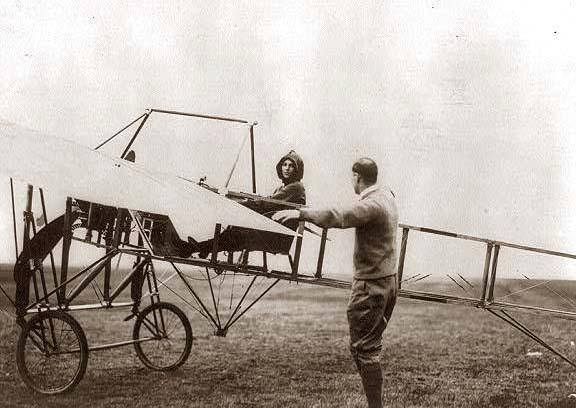 When she and the officials arrived this morning, the field at Garden City, Long Island, was shrouded in fog, so the trials could not immediately be held. But Quimby insisted that the sun would come out and burn off the fog, and by 6:00 she was proven right. She had her Moissant monoplane wheeled out, then she climbed in, and went aloft. Flying at the standard 150 feet, she successfully circled the pylons, proving herself equally adept at right and left turns. But now came the hardest part of the test. After landing to let her motor cool, she briefly went up again, then came in for a landing, stopping within 7 feet 9 inches of the mark. This brought her close to the official world record of 5 feet 4 inches, though Tom Sopwith is alleged to have landed within a foot of his target.

She then went up again, circled the pylons once more, and landed within 160 feet of the mark a second time to show she wasn’t just lucky in the morning’s previous attempt. There remained only the altitude test, which she easily passed by going well past the 164 feet required, to 220 feet, in a series of spirals. The height was verified by a barograph carried on her plane. Upon landing for the final time she said: “Well, I guess I get that license.” An Aero Club official agreed: “I guess you do!”

In addition to being an aviator, Quimby has been a photojournalist and drama critic at Leslie’s Illustrated Weekly for the past eight years, and has written scripts that have been made into motion pictures by D.W. Griffith of Biograph.

Her interest in aviation began last October when she went to the Belmont Park International Aviation Tournament for the purpose of writing a story. Through her interest in aviation she became friends with Matilde Moissant, and they both took lessons from Matilde’s brothers at the Moissant Aviation School. Quimby’s progress at the school has been reported by the press, since she is somewhat well-known in New York. Now that she’s a licensed pilot there is no limit to what she can do in aviation, so all her fans are looking forward to this new chapter in her life.