Today was “graduation day” for the first class of officers of the Women’s Army Auxiliary Corps (WAAC), and all the dignitaries present to witness the ceremony were quite impressed with what the women had accomplished since beginning their training on July 20th.

Though the battle to get approval for the WAAC was long, and accompanied by a good deal of skepticism about women in uniform, there was nothing but praise today from two Major Generals, the WAAC Director, and the Congressional sponsor of the bill establishing the Corps. 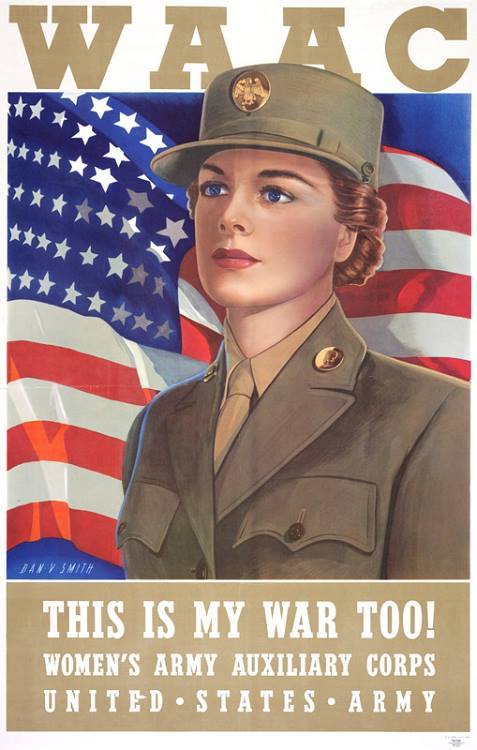 After the graduates passed in review prior to the ceremony, Major General Ulio, Adjutant General of the Army said, “I’ve never seen anything like it. When the first company came by my first reaction was to applaud rather than salute. It was outstanding. Many of our soldiers would do well to emulate them. I am very proud to be a part of this.”

Oveta Culp Hobby, Director of the WAAC, echoed Ulio’s sentiments and said, “I was never more proud than I am today.” Hobby had also received a telegram from General George Marshall, saying, “Please act for me in welcoming them into the Army. This is only the beginning of a magnificent war service by the women of America.”

Representative Edith Nourse Rogers, Republican of Massachusetts, who never wavered in her efforts to establish the new group, told just how long her struggle had been as she delivered the commencement address. “You represent a dream which I conceived during the First World War,” she said, “when, working in England and on the battlefields of France, I saw work performed by members of the women’s army.”

During that conflict 21,480 women served as Army nurses, 10,245 of them in Europe. There were also 1,476 Navy nurses. Over 400 military nurses died in the line of duty, most from a particularly vicious and contagious form of influenza that swept through the packed military hospitals. Rogers told today’s graduates: “You are soldiers and belong to America. Every hour must be your finest hour.”

Though urged to grant direct commissions to prominent individuals or those with special skills, as some other services do, Hobby rejected the idea and has decreed that no one can become an officer in the WAAC without going through the Corps’ rigorous training. And it was quite challenging. Candidates were up early enough to be neatly dressed for inspection at 6:00 in the morning, and except for a lunch break they trained through 5:00. After supper it was time for a required study hour and washing clothes.

One objective indication of the dedication of this class was its graduation rate: 98.2% of those who began the training successfully completed it. The 436 new graduates are now Third Officers, which is the equivalent of Second Lieutenant. (They have their gold bar, but the WAAC insignia for their uniform is still in production since the WAAC was only created on May 15th.)

After leaving Fort Des Moines in about two weeks, some of the new officers will be deployed to engage in recruitment, others to train those new recruits, or to take over jobs presently being done by male soldiers so the men can be freed for combat. Some of the women may even be sent to assignments in England. But wherever they’re stationed, they will certainly be of great service to the country, and have the opportunity to show that women can serve in the military as well as in defense plants to support our war effort.