In a stunning – and welcome – development today, Republican Presidential nominee Warren G. Harding has reversed the position he took just yesterday of being unwilling to help in the fight to win ratification of the Susan B. Anthony (nationwide woman suffrage) Amendment in Tennessee.

He has just sent a series of telegrams and made a number of statements indicating that he is fully committed to helping win the fight for suffrage. 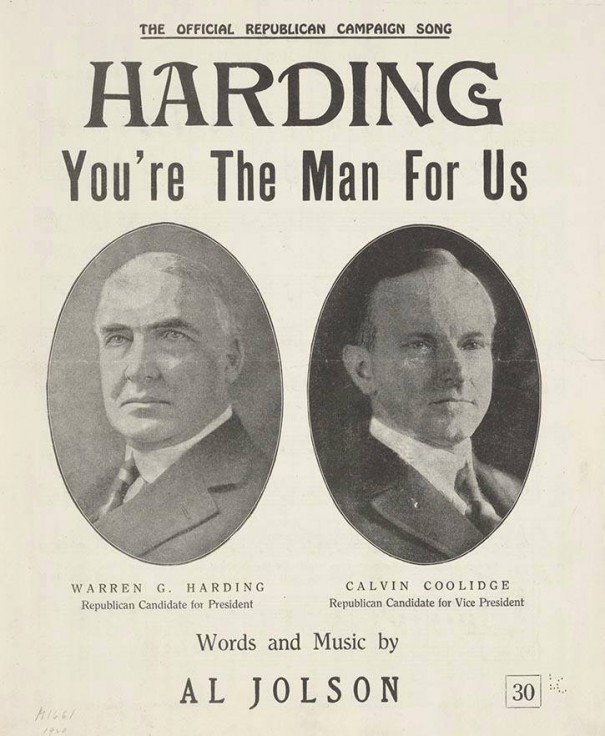 His first telegram went to State Senator John Houk, head of the party in Tennessee, asking Houk to find out which Republicans in the legislature could use some lobbying, and what Harding could do to help win the 36th and final State needed to ratify the proposed 19th Amendment:

With the approach of a decision by the General Assembly of Tennessee on the matter of ratifying the suffrage amendment to the Federal Constitution, I would like to be advised as to a poll of Republican members. I cling to the belief that the Tennessee Republicans are in a position to serve both party and country by effecting ratification. Will welcome advice as to whether I can aid in securing this act of justice to the women citizenship of our nation.

Harding then telegraphed Carrie Chapman Catt, head of the National American Woman Suffrage Association. She had told him of her concerns about diminishing support among Republicans, the party which has provided a substantial majority of the political support for suffrage so far. His message to her said:

Your telegram received. No discouragement is voiced from here. On the contrary, we are continuing to encourage Republicans of the Tennessee Assembly to join cordially in the effort to consummate ratification.

Harding has also talked with Abby Scott Baker of the National Woman’s Party. He told her that he would take an active part in the suffrage fight in Tennessee, and will send telegrams to two more key Republican legislators, as well as to the Republican candidate for Governor, urging them to work to secure solid Republican support for suffrage when the vote is taken.

His turnaround appears to have been due to a report given him late yesterday by the Republican National Committee. Early in the day he said in a telegram to the Harding-Coolidge Republican League of Washington, D.C., that he could not lobby fellow party members in Tennessee until he knew the reasons for their opposition, but that the R.N.C. would look into the situation there. Apparently it did, and gave him compelling reasons to end his “hands off” approach.

Though the text of the Republican National Committee’s recommendation is not known, it must certainly have referenced the fact that having achieved 35 of the 36 State ratifications needed, the suffrage amendment is virtually certain to be ratified at some point, and the only question is whether it will win in time for women in non-suffrage States to vote in the General Election in November. If it is ratified in time, both parties will want to take credit for enfranchising millions of new women voters, and if it isn’t ratified in time, neither party will want to be blamed by millions of women in States where they can already vote for failing to enfranchise the women of the other States. So, having their standard-bearers out there visibly working for woman suffrage is a good strategy for both parties no matter what happens in Tennessee.

Meanwhile, long-time suffrage supporter and this year’s Democratic Presidential nominee James Cox told Abby Scott Baker of the National Woman’s Party that he might go to Nashville to personally lobby the Democratic majority there to ratify. He said that while things did look gloomy, they were not hopeless. That’s pretty much the consensus today, although the situation is obviously looking better now than yesterday. Both major parties endorsed the Anthony Amendment at their conventions earlier this summer, and now both their Presidential candidates are committed to actively lobbying the Tennessee Legislature to ratify.

But despite confident predictions of victory made by Carrie Chapman Catt on July 25th and August 2nd, this is still an uphill fight, and the situation seems to change daily. Some legislators are believed to have defected, other seem unsure, some won’t say how they’ll vote, and it won’t be known until at least tomorrow exactly who will be voting on ratification, because 10 vacant seats in the 99-member House and 3 in the 33-member Senate are up for election today. But Senator Harding’s actions have certainly brought some much-needed cheer to the suffrage camp, and if the special election goes well, tomorrow could bring even more.