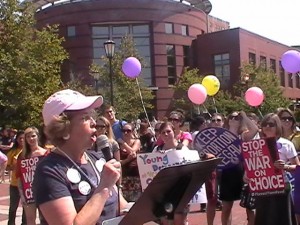 The Virginia Board of Health voted Thursday 12-1 to adopt unnecessary and punitive regulations of first-trimester abortion clinics requiring architectural renovations to change clinics into hospitals and change government oversight. Under the regulations, state authorities can enter a clinic to inspect at any time without notice to examine patient medical records, gather a list of current patients, and interview patients on site potentially violating both patient and provider privacy. In total, these regulations on first-trimester abortion providers are the most extreme seen to date in the nation.

In February 2011, the Republican dominated Virginia State Legislature passed and Republican Governor Bob McDonnell signed into law SB 924 requiring first-trimester abortion clinics to be regulated as hospitals. The state already requires abortions after the first 12 weeks of pregnancy to be performed in a general hospital. If unchallenged in the courts, these regulations will close most if not all abortion facilities in the state.

Board member James Edmondson Jr. cast the single vote against enacting the punitive regulations after three hours of battling for a series of amendments proposed to weaken the heavy-handed regulations. One amendment would have exempted clinics performing only medical abortions by prescribing the pill Mifepristone to patients and others were intended to protect patients’ privacy.

Staff member of Attorney General Ken Cuccinelli’s office advised the Board after the introduction of each of Edmondson’s amendments, repeatedly saying the changes exceeded the authority of the Board. Feminist Majority Political Associate Corrina Beall who was at the hearing said, “Attorney General Cuccinelli’s staff intimidated the Board and delivered lob-sided votes against any of the amendments”.

Edmondson told reporters after the vote, “I think access will wind up being at risk in many parts of the state because of this”. Edmondson said he believes restricting access to abortion is the primary aim of the General Assembly-mandated regulations.

A packed boardroom of over 100 concerned advocates witnessed the vote on abortion regulations after a heated 90 minute period of public comment. Thirty-two individuals gave comments to the Virginia Board of Health, pro-choice advocates outnumbering regulation supporters 2 to 1.
These are some of the afternoon’s highlights:

Nurse Practitioner Gail Francis, who opened Virginia’s first abortion clinic in the same year as Roe v. Wade in 1973, said her experiences before abortion was legalized as a nurse in the ER “put me on a journey to make sure no woman senselessly dies from this simple medical procedure”.

Rosemary Codding, veteran abortion rights activist and founder and director of Patient Services at Falls Church Healthcare Center challenged the Board, “it is never the wrong time to do the right thing”.

Virginia League of Planned Parenthood spokesman Tom Sheilds testified as a father, telling the Board, “Regulations intrude on the rights of Americans, including the rights of my three young daughters”.

Virginia Delegate Charnielle Herring, chair of the Virginia Legislature’s Reproductive Health Caucus, called for a depoliticization of provider regulations: “what is important is that w have medically accurate and scientifically sound regulations”.

Jill Abby of Richmond Medical Center for Women told the Board that the regulation’s handling of both patient and provider privacy was unacceptable. “These confidentiality issues conflict with medical ethics and federal law,” she said to the packed board room.

Activist Eric Scott asked Board members of regulations characterized as the strictest in the nation, “Is this what you want Virginia to be known for?”

Youth activist Kate Bowler told the Board, “I think it’s important for you to see my face and know that as a young woman of reproductive age, I am against these regulations”.

Young women will bear the brunt of repercussions of regulation. About one third of the audience attending stood to be represented by Feminist Majority Political Associate Corrina Beall, and this crowd of young women remained standing in silent support as Beall described the essential reproductive health services young women obtain from women’s health centers at low or no cost. Services include cervical and breast cancer screenings, birth control counseling and access, sexually transmitted infection testing and treatment, incest, rape and sexual abuse counseling and referrals, free emergency contraception, free condoms and free pregnancy tests. Many of the youth activists in attendance Thursday were recruited by the Feminist Majority Foundation Campus Project. Beall told the Board, “The young women of Virginia rely on these services. The families of Virginia rely on these services and my generation rely on these services. Do not take them away.”