Calling all DC interns and feminists! The Feminist Majority Foundation’s annual intern briefing is upon us, and this year it’s going to be better than ever. 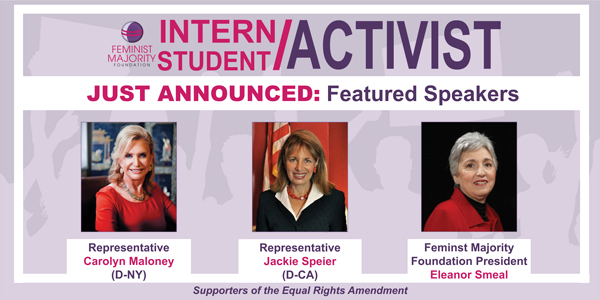 This year, for the first time, our very own interns will be speaking in addition to keynote speakers from Congress and FMF. We’ve been working hard all summer becoming experts on our individual projects and the women’s issues that are relevant right now, and we want to spread the passion that we’ve been cultivating to our fellow interns around the Capital. In addition to the intern panel, speakers will include feminist leaders Eleanor Smeal, Rep. Jackie Speier, and Rep. Carolyn Maloney. We’re hoping the combination of their experience with the accessible voices of their peers will fire up any budding feminists in attendance and give them the tools to take their activism further.

The focus of the briefing will be student activism, and while panelists will be educating the audience, they also want the focus to be on constructive action. All too often, our generation feels disempowered or overwhelmed by the decisions made for them by the federal and state governments. Things like TRAP laws and the recent SCOTUS decisions frustrate college age students, but many are at a loss for how to go forward. We want our briefing to get them even more fired up, but we know many of our peers already care—they just don’t know how to get involved. If you’re wondering how you can jump in as a student or intern activist in the fight for gender equality, our intern briefing should help give you some starting points.

We’ll cover topics that include CEDAW (The UN Convention on the Elimination of All Forms of Discrimination against Women), international family planning and the unmet need for contraception, campus sexual assault, economic issues, and the ERA. Some of these topics, like CEDAW and the ERA, have been around for a while and need a revitalized push to progress. Others are hot topics for young people: campus sexual assault is relevant to every student in attendance and is being discussed in the current Congress as well. Our panelists will cover each issue and what their fellow interns and students can do to help, while the speakers will drive home the relevance of the issues and show that there is support for our passions within the governmental sphere.

It’s so important for students to be activists in their own communities and ensure that everyone has the tools to do so. If any of this has piqued your interest, please RSVP online. We’d love to see you there!

It’s the stuff of nightmares: almost 150 women in California detention centers sterilized without the proper approvals, many without consent or under intense coercion from doctors and prison staff.

The California State Auditor’s report detailed these violations, citing 39 cases of improper or absent consent procedures and showing that all but one of the cases documented in the report failed to follow the proper procedure for approving the operation. The report expresses concern over the lack of documentation in general—after all, if the procedures were carried out properly and were truly what the patients wanted there would be nothing to fear from documentation.

Perhaps the prison authorities were worried that increased documentation might highlight the more subtly harmful aspects of these sinister practices. In addition to blatantly violating state protocol and safeguards surrounding sterilization procedures, prison authorities specifically pressured certain types of prisoners—namely, women who have already had children or have been in and out of prison. Former Valley State Prison inmate Christina Cordero said the institution’s OB-GYN, Dr. James Heinrich, repeatedly pressured her to agree to a tubal ligation. Cordero reluctantly agreed, saying Dr. Heinrich “…made me feel like a bad mother if I didn’t do it,” but later came to regret having the procedure done. Testimonies like Cordero’s really seem at odds with Heinrich’s claims that the women didn’t want any more children.

Prison authorities and health professionals have inherent power over the inmates, as a virtue of their positions alone. Using this coercive power to pressure women into medical procedures they don’t want—and don’t consent to in almost a third of cases—is disgusting. Our friend Dr. Heinrich provides further insight into his twisted mindset when he responded to inquiries over the price of the sterilizations.

“Over a 10-year period, that isn’t a huge amount of money,” Heinrich said, “compared to what you save in welfare paying for these unwanted children—as they procreated more.”

His statement illustrates all of the problematic aspects of a program like this. First of all, treating children as economic burdens and balancing out how much they cost is abhorrent, and completely ignores the reality of having a child and all of the emotional and situational complications that come with it. The decision to have children—or not—is a deeply personal decision on the part of the parents, and the government’s opinion of how much such a decision would cost them has absolutely no place in the process. Second, Heinrich assumes the children are “unwanted.” If he never went through the proper protocol for obtaining consent from the patients how could he profess to know whether they are wanted? Cordero’s case shows that the issue is far from black and white. The tone of his comment in general dehumanizes the women and their children—after all, animals procreate. Humans have children. His word choice speaks volumes about his opinion of the women placed into his care.

Heinrich’s attitude towards the inmates is reminiscent of the United States’ dark past with sterilization: approximately 60,000 sterilizations were carried out in 32 states that passed eugenics laws in the early-to-mid twentieth century. In those days, sterilization of certain vulnerable populations was condoned by the general public, as whole groups were deemed unfit to reproduce without so much as a chance to argue for their rights. This mindset that certain groups of people—such prison inmates, the mentally ill, or “promiscuous” women— should be denied the opportunity to basic reproductive rights was the basis for the eugenics movement 100 years ago, and is clearly still present in the California prison system.

But the threat is far from confined to California. Recently my home state of Virginia offered to reduce a man’s sentence if he agreed to be sterilized. None of the charges against him were sexual offenses, but even if they were I fail to see how this practice is anything but eugenics. And under such intense coercion who would resist? There are also private organizations that pay those they deem inferior to undergo sterilization. For example, a private organization, Project Prevention, pays crack cocaine addicts $300 to get sterilized. All of these practices have obvious sexist, racist, and classist overtones, yet they seem to slip by without too much public outcry.

Shackling is another dehumanizing practice that is all too common in US prisons and jails. In 30 states across the US, it is common procedure to shackle women while they are in labor, or even when they are giving birth. Shackling occurs regardless of the nature of the inmate’s crime; petty theft or drug offenders are restrained in the same manner as a violent criminal. Obviously this practice is not really a security issue— it is just another example of the ways in which the prison system victimizes and dehumanizes women. Many women who become incarcerated while pregnant face violence, poverty, or mental health issues prior to coming to prison; they certainly don’t need further emotional or even physical complications as a result of inhumane treatment during their pregnancy and labor.

Luckily, many states have been banning this practice in recent years. Recently, Minnesota became the 20th state to ban shackling as a result of a project called Isis Rising, which advocates for maternal and infant health of pregnant women in prison. Massachusetts banned the practice last March, and we hope that other states follow suite. All of the negative press surrounding the treatment of women in prison should be used to garner momentum for positive movements like the one seen in Minnesota.

Among all the talk of consent in sexual activity – which is immensely important – we should also be concerned about the ability of marginalized groups to give or withhold consent for irreversible, strenuous medical procedures such as sterilization, or to have power over their own body during child birth. Just because a woman has been convicted of a crime does not by any means deprive her of basic ownership of her own body. The backlash over the California prisons’ actions and the practice of shackling is more than deserved, and I hope this leads to a closer examination of practices in all states. The power dynamic that is inherent in the prison system means that sterilization is bound to be problematic. California’s example highlights this; there were plenty of safeguards in place, but authorities just ignored them. Better rules don’t help if people in power don’t respect them. Some practices, shackling and sterilization among them, can’t be “done right” and need to be eliminated completely if we ever hope to have a prison system which treats women as people.