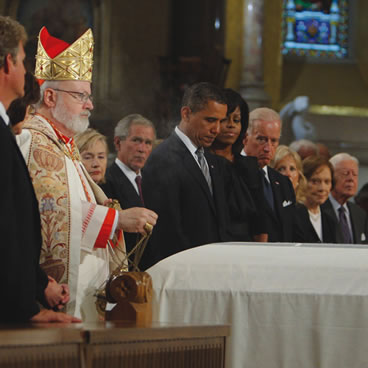 As health care reform is being debated today at the White House between Democrats and Republicans, who better to weigh in than … Catholic bishops?

They released a letter today asking for “bipartisan action to advance health care reform that protects human life and dignity.” Sounds innocent enough. But what the Bishops really want is to block insurance plans from covering abortions and to institute “conscience clauses” that will allow health-care workers to refuse treatment to patients if they object on “moral grounds.” And you can imagine that such refusals could extend way beyond abortion and include birth control, voluntary sterilization, in-vitro fertilization and even refusing to honor end-of-life directives.

The bishops, under the rubric of their wealthy “trade association,” the U.S. Conference of Catholic Bishops, have already had an inordinate effect on the recent congressional struggle over health-care reform. As Jon O’Brien of Catholics for Choice points out in the new issue of Ms. magazine, the bishops swept in at the 11th hour in the House of Representatives to insist on an amendment to the health-reform bill that would significantly restrict access to abortion way beyond the ban on federal funding for abortions already in place.

Their water carriers were Rep. Bart Stupak (D-Mich.) and Rep. Joe Pitts (R-Penn.), whose amendment prohibited coverage of abortion services in public or even private health insurance plans that would be available through the proposed health insurance exchange. Many believe that this could kill abortion coverage in all insurance plans, amounting to the greatest setback for women’s reproductive rights since the Hyde Amendment banning federally funded abortions was passed in 1976.

And why do the bishops care so much about this? Is it strictly a moral issue for them?

Well… we can’t forget that the Catholic Church also has a huge financial interest in health-care reform. The numbers are extraordinary: 624 Catholic hospitals in the U.S., 373 other Catholic health-care institutions, 48 Catholic managed care plans, and 90 million patients treated under Catholic auspices in 2008 alone.

And all those Catholic medical centers depend on federal funding. Well over half their revenue comes from the government in the form of Medicare and Medicaid. Yet Catholic health care already follows its own rules, forbidding certain medical procedures regardless of the patient’s beliefs or wishes. Now the bishops want the whole medical community to essentially follow its rules.

O’Brien, in the Ms. article, points out that this isn’t a campaign led by U.S. Catholics–just by the bishops’ D.C. organization, with its $145 million annual budget and 300 staffers. A survey of Catholic voters last year by Belden Russonello & Stewart showed that 68 percent of Catholic voters believe the bishops are just plan wrong on this issue. The Catholic voters also overwhelmingly believe that insurance should cover abortions in cases of rape or incest, severe fetal abnormalities, and risks to the life or health of a woman. Half of those voters approve of abortion coverage any time a woman and her doctor deem it appropriate.

It’s time for the bishops to stop meddling. Stop trying to punish pro-choice Catholic legislators (as was done to Rep. Patrick Kennedy, D-R.I.). Stop using the pulpit to call on Catholics to contact their federal representatives. Stop distributing flyers in church pews urging parishioners to lobby for abortion restrictions in the health-reform legislation.

Instead, we suggest some useful exercise for the bishops: Get out your hammers and nails and start rebuilding the wall separating church and state.

For more on this topic, see the new issue of Ms. on newsstands, or join the Ms. community .