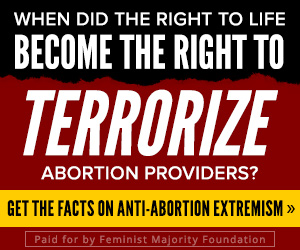 The FMF’s ads are currently running on the front pages of Politico and in some subscribers’ copies of The Washington Post. Its goal is to get the House Select Investigative Panel of the Energy and Commerce Committee, which was formed to investigate Planned Parenthood and other reproductive healthcare providers, to either redirect its focus to look into violence against abortion providers, or disband.

“How can House members investigate abortion providers and ignore the activities of key CMP official and Operation Rescue president Troy Newman, or the routine harassment and intimidation of abortion providers?” asked Eleanor Smeal, FMF president, in a statement.

Readers who click on the FMF ads will be directed to information about the extent of anti-abortion violence in the United States, for example, the fact that more than half of the abortion providers surveyed for the 2014 National Clinic Violence Survey report being the target of threats and intimidation.

“The climate of violence is built by following clinic staff around town, putting them on WANTED-style posters with lurid language like ‘The Killers Among Us,’” said Katherine Spillar, FMF executive director. “It’s about harassing their neighbors and their kids at school; posting their personal information online; running ‘No Place to Hide’ campaigns. These activities act as a magnet for extremists or disturbed individuals who are willing to kill abortion providers, law enforcement, clinic staff or even bystanders.”

Ms. has reported in the past on the connections between anti-abortion extremists, demonstrating that those who kill abortion providers aren’t “lone wolves.”

“Anti-abortion violence isn’t just about lone wolves,” says Smeal. “It is also about the wolf packs that harass and terrorize abortion providers.”

If you want to take action on this issue, sign a petition urging the House to disband its committee investigating Planned Parenthood, or focus instead on probing the threats and violence facing abortion providers.