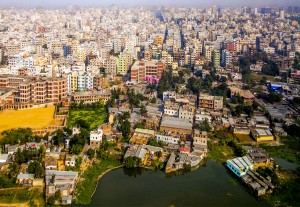 An eight story building in Bangladesh collapsed on Wednesday morning, killing at least over 100 people. The death toll is still rising.

The building in the suburb of Savar, outside of the capital Dhaka housed five garment factories as well as a shopping center. An official appointed to give information about those missing or hurt told Reuters that 96 people were confirmed dead and at least 1,000 were injured. Firefighters said that they believed over 2,000 people were in the building at the time of the collapse. The Daily Ittefaq, a local paper, reports that the death toll is over 100, and the government has declared Thursday a national day of mourning.

Mohammad Asaduzzaman of the local police station told reporters that a crack had been detected on Tuesday and the factory owners were given a warning not to allow their workers in the building. However, factory owners either ignored or never received the warning. “There were some crack at the second floor, but my factory was on the fifth floor,” said Muhammad Anisur Rahman, a factory owner. “The owner of the building told our floor manager that it is not a problem and so you can open the factory.” Another worker said that factory owners told their workers they had examined the crack and “not to worry.”

Outrage over the conditions of garment factories in Bangladesh gained international headlines in November of 2012 when 112 workers died during a fire in a factory that was producing clothes for Walmart and other Western retailers that an official investigation ruled that the fire was deliberately started. In addition to being a deliberate act, the investigation determined that up to nine officials prevented workers from leaving the building and even padlocked exits.

The investigation also found severe evidence of negligence on behalf of the factory owner, Delwar Hossain. Hossain had originally denied that the factory was unsafe, however the factory’s fire certificate had expired before the fire. In addition, the building only had permission to be three stories high but was in fact nine and lacked sufficient emergency exits.

Aerial of Dhaka, the Capital of Bangladesh from Shutterstock