Last night, dozens of activists gathered outside the Supreme Court for a candlelight vigil calling for an end to anti-abortion terrorism. 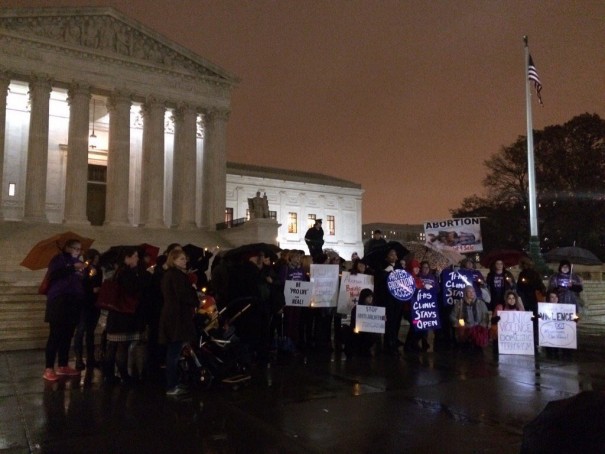 The vigil, hosted by Reproaction, included representatives from NARAL Pro-Choice America, Planned Parenthood, the Feminist Majority Foundation, GetEQUAL, the National Council of Jewish Women, and others.

Representatives Jan Schakowsky (IL) and Mike Quigley (IL) joined the crowd and spoke of the need for abortion access and an end to the dangerous anti-choice rhetoric. Schakowsky recounted how she “has never seen such a blatant attack on women’s health and women’s reproductive rights on abortion.”

Erin Matson, co-founder and co-director of Reproaction also gave an impassioned speech: “Anti-abortion terrorism and the tolerance to it in the United States – for far too long we’ve tolerated a poisonous rhetorical climate.” Speakers called for a renewed dedication to ending clinic violence and urged activists to organize to preserve access to comprehensive women’s healthcare, including abortion and birth control.

The vigil comes days after the shooting in a Colorado Springs Planned Parenthood clinic that killed three and injured at least nine.

There will also be a Planned Parenthood-led national day of action on Saturday, December 5th. Stay tuned for details!