This week the Embassy of Afghanistan in Washington D.C. celebrated the 98th annual Afghanistan Independence Day. This celebration marks the anniversary of Afghanistan’s independence from Great Britain in 1919. Ambassador Hamdullah Mohib, Assistant Secretary of State Alice Wells, and United States Lieutenant General John Dolan were present at this event alongside both U.S. and foreign officials. Nobel Prize recipient Malala Yousafzai was also in attendance.

During his speech, Ambassador Mohib shared his positive hopes for the future, “Despite our challenges, we tirelessly pursue the realization of our potential, the potential for becoming a beacon of democracy in our region… A country where men and women have equal opportunities and contribute valuable ideas, knowledge, and projects to the world.” In addition, the Ambassador shared his gratitude for the United States’ decision to send additional troops to Afghanistan.

Assistant Secretary of State Alice Wells remarked, “Moving forward, the United States will continue to offer our friendship and support as the government of Afghanistan continues to make progress on key economic and political reforms.” This celebration of Afghanistan’s independence is an opportunity for Afghanistan and the United States to come together to promote a better for future for all Afghan citizens.

A representative from the Feminist Majority Foundation attended this celebration and had the opportunity to meet with Malala Yousafzai. 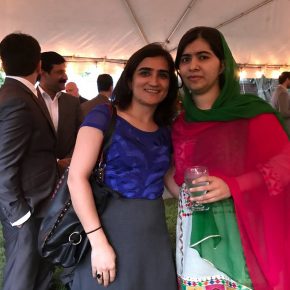