On June 27 at about 6:30 AM, Bree Newsome scaled the flagpole at South Carolina’s Statehouse and removed the confederate flag. Newsome’s removal of the flag with the help of a white man is an act of civil disobedience that demonstrates a transcendence of the boundaries of race and gender, and it is a true testament to the power people have when working together. 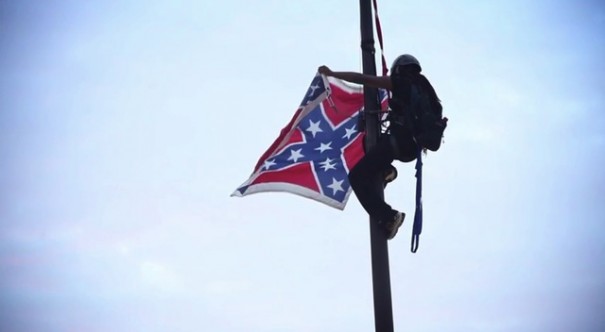 “For far too long, white supremacy has dominated the politics of America resulting in the creation of racist laws and cultural practices designed to subjugate non-whites,” Newsome said in her first-ever statement after the flag’s removal. “And the emblem of the confederacy, the stars and bars, in all its manifestations, has long been the most recognizable banner of this political ideology. It’s the banner of racial intimidation and fear whose popularity experiences an uptick whenever black Americans appear to be making gains economically and politically in this country. It’s a reminder how, for centuries, the oppressive status quo has been undergirded by white supremacist violence with the tacit approval of too many political leaders.”

Newsome is charged with “defacing a monument,” a misdemeanor, and faces imprisonment up to three years and a fine of up to $5,000. James Tyson, who aided Newsome by belaying her, was also charged. In just two days, over 4500 people have raised over $114,000 online for her bail fund. According to a statement from Ignite NC, “some of the funds will go towards covering the bonds of Bree and Jimmy and the rest will go toward legal defense funds for other #BlackLivesMatter direct actions.”

Celebrities are also coming forward to support Newsome, both economically and politically. Famed documentary filmmaker Michael Moore tweeted an offer to “pay her bail money or any legal fees she has.”  A number of other celebrities have taken to social media accounts to share their support, ranging from hip-hop artists like 2 Chainz, Nas, Questlove, and Big Boi to actress Gabrielle Union. Director Ava DuVernay also took to twitter to share her support:

Yes. I hope I get the call to direct the motion picture about a black superhero I admire. Her name is @BreeNewsome. pic.twitter.com/BgMeaNsbYk

At her core, Newsome is a freedom fighter and an organizer. She’s the western field organizer for Ignite NC, a non-profit based in Durham, a co-founder of StAY UP NC, and a People’s Power Assembly organizer and an organizer with Tribe CLT, a group of “committed individuals dedicated to community building, education, and revolutionary action.” She was one of six protesters arrested while participating in a sit-in at North Carolina’s Statehouse to protest the draconian “monster” voter suppression bill passed in 2013. An NYU Tisch School of the Arts graduate, she has also released a number of videos, short films, and songs, including “#StayStrong: A Love Song To Freedom Fighters,” which she performed at the first-ever Black Lives Matter Youth Assembly.

Newsome’s father is a former dean of the School of Divinity at Howard University and former President of Shaw University in Raleigh, the university where the Student Nonviolence Coordinating Committee (SNCC) was founded. He is currently a trustee of Duke University, and president of the National Underground Railroad Freedom Center.