Gloria Steinem, co-founder of Ms. magazine and longtime feminist, was honored with the Presidential Medal of Freedom yesterday, alongside Sally Ride (posthumously), Oprah, Bill Clinton , and other global leaders. We couldn’t be more proud of her, and neither could the folks at Ms., which President Obama named in his speech for Steinem as one of her accomplishments in the movement for women’s equality. In a speech at the National Press Club Monday, Steinem said she was proud to accept the medal “for the entirety of the women’s movement.”

“People often ask me at this age,” she said later on, “‘Who am I passing the torch to?’ First of all, I’m not giving up my torch, thank you! I’m using my torch to light other people’s torches. … If we each have a torch, there’s a lot more light.” Together with Gloria’s leadership, we’ve accomplished so much over the last 40 years – but there’s still much left to do. With your support today, we can keep lighting the torch that Gloria started so many years ago.

Ms. will be sending Gloria a congratulatory card within a few days, and we’d love for you to sign it! Let Gloria know you’re proud of all she’s done and excited for the future of this movement, and even leave her a personal message! All you have to do to sign it is click here. 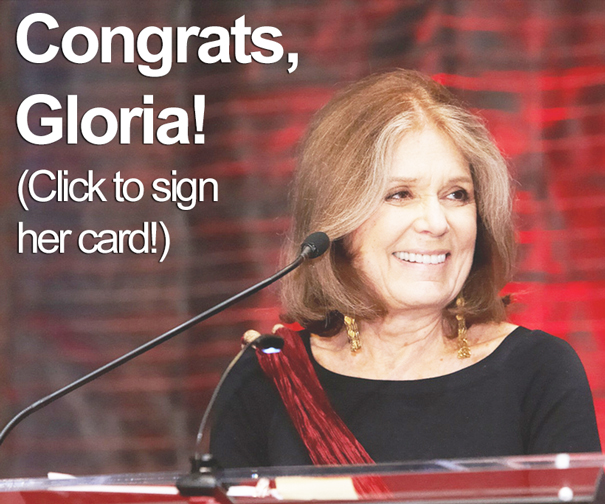