Results of a new poll on American attitudes about abortion produced by ABC News in conjunction with the Washington Post were released today. The study, conducted by telephone from July 18-21, encompasses over 1,000 English- and Spanish-speaking adults. Cell phones and landlines were included.

Here’s what they learned:

+ A majority of Americans support abortion rights and access: 55 percent of all Americans believe “abortion should be legal in all or most cases.” 54 percent oppose state laws that close clinics and make it more difficult for them to stay open.

+ A majority of Americans think abortion is a national, and not local, issue: This year has had a record number of legislation put forth to stop abortion state-by-state, and we’re in the midst of a clinics crisis often caused by TRAP (Targeted Regulation of Abortion Providers) laws. 66 percent of Americans polled think abortion laws should be decided constitutionally, and not by individual states. Only 30 percent of Americans support state-based abortion policy; a majority of those who oppose abortion still agree that the issue should be decided federally. 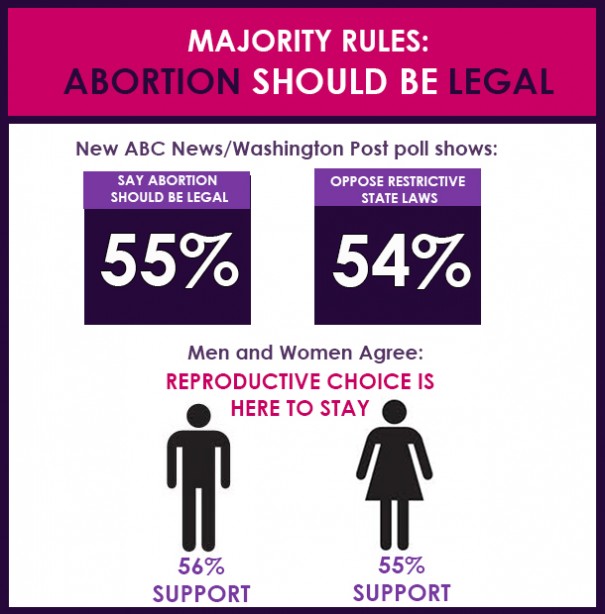 + Party lines and political ideology matter: Liberals overwhelmingly support abortion rights (80 percent) and moderates also err toward agreeing that the practice is legal (66 percent). Conservatives, however, overwhelmingly oppose abortion rights 68-30 percent, and 79 percent of those who self-define as “very conservative” oppose abortion. Republicans also support state-based abortion legislation whereas Democrats strongly disavow it. (Much of the legislation that successfully banned, blocked, or minimized abortion in various states this year was enacted by openly anti-choice state leaders.)

+ Gender and Ethnicity don’t matter as much: Men and women only differ by one point nationally on the view that abortion should be legal (56 percent of men and 55 perfect of women feel that way), although women are more likely to oppose state restrictions on abortion and men are more likely to define an ideal legal limit on abortion at 24 versus 20 weeks. And while whites and blacks [sic] support abortion rights by a majority, Hispanics remain divided and narrowly err toward desiring the practice to be illegal. Overwhelmingly, however, these factors remain more minor impacts on abortion attitudes.

You can read the full results packet at Langer Research.