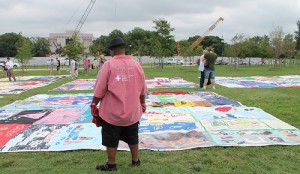 Washington, DC, which is hosting the 2012 International AIDS Conference this week, has a higher HIV/AIDS infection rate than African countries such as Ethiopia, Nigeria and Rwanda, ABC News reports. Approximately 3 percent of the city’s residents are infected with the virus with 7% of all Black males being HIV positive. Infection rates amongst Black females are lower at 2.9%. When the infection rate is above 5% it is considered a “generalized and severe epidemic.”

US-based Center for Disease Control and Prevention reports that about 1.2 million Americans are currently living with HIV/AIDS, an all-time high. African-Americans, who are 14 percent of the U.S. population, account for 44 percent of all new HIV infections and deaths in 2009, making them the largest group.

Despite the fact that globally infection rates are decreasing, 2.7 million new infections in 2012 compared to 3.2 million in 1990, the US still about 50,000 new infections every year, according to UN AIDS.

The rate among heterosexual black women was 15 times more than the rate of white women and more than three times that of Latinas.

Gail Wyatt, associate director of the UCLA AIDS Institute, says that not enough attention is being paid to U.S. HIV/AIDS crisis: “Our challenges have to do with disparities we have always seen between those who can afford health care and those who are not in the health care system. We are talking about affordable care and who gets treatment and which populations are disenfranchised and have not gotten care and have no insurance.”

The Obama Administration adopted the first National Plan to combat AIDS at home in 2010.