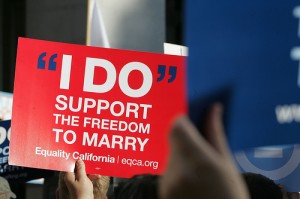 The Democratic platform drafting committee approved a draft of the platform that includes marriage equality and workplace equality. A source from the Democratic Party confirmed to The Huffington Post that the committee unanimously decided to endorse same-sex marriage at a recent meeting in Minneapolis. Another platform committee will review the draft in two weeks in Detroit before it is presented for approval by the Democratic National Convention delegates in Charlotte in September.

Several state Democratic parties already include marriage equality in their platforms, but this will be the first time marriage equality is included in the national party platform. In 2008 the platform openly opposed the Defense of Marriage Act and in 2004 it disavowed Republican attempts to pass a constitutional amendment banning same-sex marriage, but it has never explicitly endorsed same-sex marriage.  The Washington Blade reports that the language approved by the committee this weekend supports same-sex marriage and includes positive language on the Employment Non-Discrimination Act.

Rep. Barney Frank (D-Mass.), who recently married his partner, gave his full support of the draft in a telephone interview with The Advocate. “Yes, it will be in the platform,” said Frank. “I am in favor of it being included and it will be included.” Frank emphasized that marriage equality has been an established position for the Democratic Party that was affirmed by President Obama’s support in May.

Marc Solomon, the national campaign director of Freedom to Marry, praised the committee’s decision to include the marriage equality plank. “We are grateful for the Platform Drafting Committee’s unanimous vote to include the freedom to marry in its draft of the Democratic Party platform,” he said. “As I testified to the Committee on Friday, the Democratic Party has a noble history of fighting for the human and civil rights of all Americans. We are proud that the Committee is including language that will ensure the Party is leading the way forward in supporting marriage for loving and committed same-sex couples and their families.”