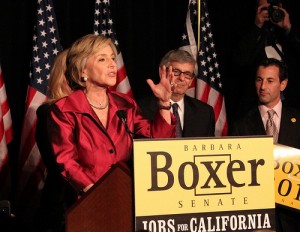 The Senate passed the VAWA reauthorization in April with provisions to increase protections on college campuses in addition to protections immigrant and Native American women and LGBT survivors. The House bill omitted these provisions which, according to Senator Boxer’s statement yesterday, would result in 30 million survivors denied protections under VAWA.

Calling on House Speaker John Boehner (R-OH) to pass the inclusive Senate bill, Senator Boxer said in her remarks on the Senate floor, “Please hear our plea…What we are saying in a bipartisan way is that we have figured out a bill that will protect everybody…When someone is bleeding on the floor we help them in this country…we don’t ask them are you gay, are you straight, are you an immigrant, are you a college student.”