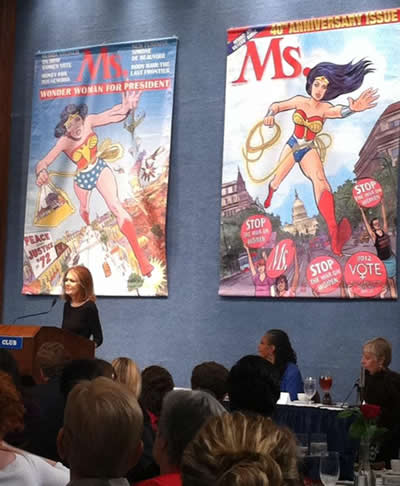 On current challenges facing the feminist movement:
“I was thinking of what it is that we face collectively…first it is a profound, deep backlash, which is in a sense a tribute to the frontlash, right? If we hadn’t changed the majority [of] hearts and minds in this and other countries we would not be having this kind of backlash. If you look at the public opinion polls you feel quite good because we do indeed have the majority on every single issue that we’ve raised, but nowhere is it written…that the majority will win, and there is enormous power on the other side and enormous financial interest on the other side. Just as one example of what is at stake in terms of economics, if we just had equal pay in this country, just the single thing of equal pay, which is what most everybody agrees with, right? We would have the single most important economic stimulus this country could possibly possibly ever have. It would be about $200 billion dollars more a year injected into the economy, about $150 a week more for white women on the average, for women of color something between $250 and $350. And it would be injected into the economy exactly where it’s most likely to be spent. We are not going to send it to the Cayman Islands, no! We are going to spend it and it is going to create jobs…so wherever we look I think we see what’s at stake because of course the folks that would have to pay that equal pay don’t want to pay. I mean, women are of all races and groups and in the world at large, the single greatest source of cheap labor and completely unpaid labor and that is a source of enormous resistance.”

On social movements in the context of history:
“All of the great social justice movements and the environmental movement are linked. Sometimes on campuses someone will say to me: why is it that the ultra right wing is against both lesbians and birth control? But… the patriarchal, hierarchical controlling reproduction kind of point of view is that sexuality is only ok when it is directed toward having children and takes place inside patriarchal marriage.” She continued “Our movements are LINKED not RANKED and that we in this room are linked, not ranked. That the whole paradigm of what we are looking for…is the circle, not the pyramid.”

On moving forward as a feminist movement:
“I think the backlash is problem number one, but problem number two is that the backlash takes the form of telling us that we’ve already succeeded… Young women are not feminists. Look at the public opinion polls! Young women are more supportive of feminist issues than older women are. It’s absolutely wrong, but that is the myth. You’ve already succeeded, that was yesterday… Part of what I think we need to rededicate ourselves to here today is an understanding that all great social justice movements must last something like a century if they are to be really deeply absorbed into the culture and understood to be normal and natural. We all absorb what we grew up with and it feels like ‘home’ and it familiarizes hierarchy or even violence sometimes in the home. So, it’s going to take generations to make the norm one of linking, not ranking. But we are, I would say, in this wave…we are at least 40 years into it…I don’t know how to break this to you, but we’re only half way!”

On the future:
“I hope that we will after today never again fall for the idea that it (the feminist movement) is over, or that it’s not necessary anymore or that it doesn’t have huge majority support. It does, absolutely. We have won the hearts and minds, but we have not won the power, the employers, the hierarchical religions. That’s the source of the backlash, that’s where it is. But one day, one day, we will get there.”