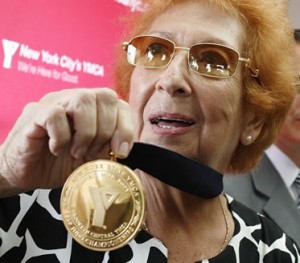 It’s really, really hard to get a sport into the Olympic Games.

The sport must be played competitively in a certain amount of countries—which can mean that boosters must help develop the sport outside of their home country as well as within it—and the International Olympic Committee (IOC) must be convinced. For women’s sports, the latter can be a Sisyphean task, considering that the staid old IOC currently has just 16 women among its 111 members.

Ask the women ski jumpers who want to compete in the Winter Olympics this coming February in Vancouver how hard it is to get into the Games: The IOC turned them down because of the not-enough-countries-competing rule, yet allowed in the sport of ski cross, which has even fewer countries engaged in competition. Or ask softball players,who have been kicked out of the next Summer Games, receiving no support from current IOC head Jacques Rogge. As USA Today sports columnist Christine Brennan points out, , Rogge is taking the IOC in the opposite direction of previous president Juan Antonio Samaranch, who “opened the floodgates for women athletes.” At the Beijing Games of 2008, women composed just 42 percent of the competitors, still a distance from a 50-50 ideal.

When a sport does make it into the Olympics, it’s rarely attributed to the efforts of an individual. Yet when one thinks of how women’s judo became an Olympic sport, one name immediately pops to mind: Rusty Kanokogi, who passed away a week ago at age 74.

This Brooklyn-born and Japan-trained (that’s where she met her husband Ryohei) judo master spent more than 20 years promoting the sport for Olympic status. She lobbied, letter-wrote, raised money, filed discrimination suits, organized international competitions. She brought the same relentlessness to her quest as she did to the judo mat. According to Billie Jean King, “She could get people to do anything.”

A large and fearless woman, Kanokogi couldn’t be stopped by bureaucrats any more than by the pains suffered in her rough sport. Talking to Sports Illustrated writer Gary Smith in 1986, she pointed out the 13-times-broken little toe on her size 10 1/2 EEE feet and another toe that turned 180 degrees. “Ah, what the hell! Toes are insignificant,” she said.

Born Rena Glickman, Kanokogi learned judo in the mid-1950s, a time when women weren’t allowed in judo leagues. At the 1959 YMCA championships, she cut her hair short and competed with her breasts strapped down. When asked afterward if she were a woman, though, she said yes.

“Had I said no,” she told The New York Times, “I don’t think women’s judo would have been in the Olympics. It instilled a feeling in me that no woman should have to go through this again.”

She had a great role model for brazenness in her own family: her aunt Lee Krasner, a stellar modern artist whose work was long overshadowed by that of her husband, Jackson Pollock. “Lee was the first person who ever gave me credit for all I had come up through, all I had fought against,” Kanokogi told Sports Illustrated. “She reinforced me.”

In 1984, women’s judo was made an Olympic demonstration sport, and in 1988 it earned full medal status. Kanokogi couldn’t reap the reward as a competitor, since she was then over 50 and past her prime, but she coached the 1988 U.S. team.

Only cancer could finally take down Kanokogi, after a battle of several years. But even back in February, ill and in her 70s, she told The New York Times, “Can I still clobber somebody if I have to? Absolutely.”

Want to support women’s judo in the U.S.? The Women’s Sports Foundation sponsors the Rusty Kanokogi Fund for the Advancement of U.S. Judo.

For more hard-hitting feminist news and commentary, join the Ms. community and have Ms. delivered to your door!