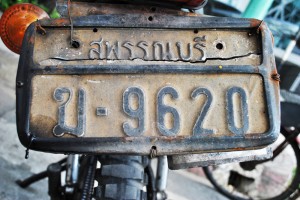 Fox determined that without a license plate promoting a pro-choice message, the proposed anti-abortion license plates violated the First Amendment and constituted “viewpoint discrimination.” According to NBC, legislation creating both a pro-choice and anti-choice specialty plates had been defeated six times in the North Carolina legislature.

Chris Brook, legal director of the ACLU-NCLF who lead the legal fight against the license plates, told reporters, “This is a great victory for the free speech rights of all North Carolinians, regardless of their point of view on reproductive freedom. The government cannot create an avenue of expression for one side of a contentious political issue while denying an equal opportunity to citizens with the opposite view.”

Representative Mitch Gillespie (R-McDowell), sponsor of the legislation, says that he will urge the Attorney General to appeal the court’s decision.

The old license plate of the motorcycle from Shutterstock