Activists gathered across the street from the Beverly Hills Hotel in Los Angeles yesterday to call on Congress to exclude Brunei from the Trans-Pacific Partnership (TPP). 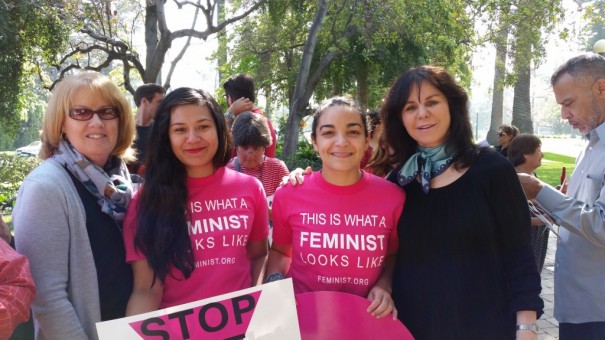 The crowd included organizers from the Feminist Majority Foundation, FMF board member Mavis Leno, as well as leadership from organizations such as 1 Billion Rising, the Los Angeles LGBT Center, and Unite Here who organized the rally. The rally was held in a park across the street from the Beverly Hills Hotel as it is owned by the Sultan of Brunei, who has recently enacted a cruel and strict penal code that places the lives of women and the LGBT community in danger of harsh punishments.

The City Council of West Hollywood passed a resolution on Tuesday opposing “fast tracking” of the TPP, and encouraging “transparent, public debate during TPP negotiations.” The resolution cited many concerns with the TPP, including a partnership with Brunei, but emphasized the negative effects of “fast track” legislation, “which would prevent Congress from amending the trade agreement and would require an up-or-down vote in 60 days.” The resolution stated “‘Fast Track’ procedures make it impossible for our elected representatives to adequately study and assess the Trans-Pacific Partnership Treaty presented to them in order to determine if this proposed Agreement is in the best interests of the American people.” The resolution is currently awaiting the Mayor’s signature.

Mavis Leno, FMF Board Member and wife of anti-TPP activist Jay Leno, echoed her concerns about “fast tracking” the TPP, as well as her frustration that the TPP negotiations have not been transparent and have largely happened in secret. She stressed that the United States should not be negotiating with a country whose policies so negatively impact women and the LGBT community.

Lindsey Horvath, a coordinator with 1 Billion Rising, spoke of the responsibility the United States has in this potential trade deal at the rally. “When our LGBT community is being stoned to death, it doesn’t matter if that’s not happening in our backyard. When our [local business and our dollars] are supporting that behavior, we’re supporting it; we’re responsible,” she said.

Right now, President Obama and the United States are negotiating a potential trade partnership with 11 countries, including Brunei, through the TPP. The Feminist Majority and members of Congress are sounding the alarm, and the Feminist Majority released a petition asking people to urge their representatives to vote against the TPP agreement.

“At a minimum, the US should not enter into a partnership with a country that just last year adopted a penal code authorizing torture and violence against its citizens,” said Eleanor Smeal, President of the Feminist Majority, in a blog for the Huffington Post, “we must call on the President to seriously address the impact of the TPP on human rights,” Smeal added.