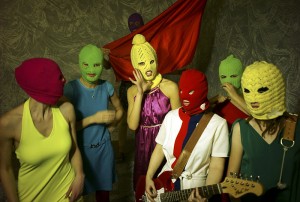 In a case that has garnered a lot of international attention, the trial for Russian feminist punk band Pussy Riot began in a Moscow court today. Nadezhda Tolokonnikova, Yekaterina Samutsevich, and Maria Alekhina, have been in jail in Russia since March, when the three women were arrested for performing a “provocative” song in Moscow’s main cathedral.

Charged with “hooligansism,” the band members were arrested when they performed (and videorecorded) a “punk prayer” on the altar of Moscow’s Christ the Savior Cathedral in dissent of Vladimir Putin. The members entered the church wearing bright colors and balaclavas, singing “Mother of God, Blessed Virgin, drive out Putin!” They noted later that their intent was to challenge the Church’s political support for Putin and to show their dissatisfaction with Putin’s 12-year political dominance.

Musicians and human rights groups around the world have been standing in solidarity with the radical feminist band both online and in the streets. Amnesty International has named the women prisoners of conscience, and artists like Sting, Peter Gabriel, and the Red Hot Chili Peppers are speaking out in support. A solidarity rally was held in Washington, D.C. last Friday outside of the Russian Embassy. Notably, the local police refused to allow the activists, who were calling for freedom of speech in Russia, to hold their rally on the sidewalk in front of the Embassy and were driven to a lot across the street.

Supporters of Pussy Riot stood outside of the courtroom today chanting “Girls we’re with you!” and “Victory!” Hundreds more packed into the Moscow courtroom to watch the trial. The court in Moscow ruled in June that the three women can be held in custody until at least January of 2013. They are facing a possible seven-year prison sentence.