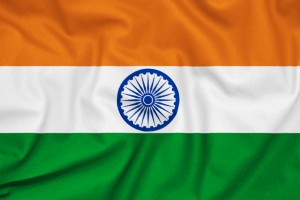 A five year old girl is in critical condition after being allegedly kidnapped and raped in Delhi, India.

The girl was allegedly kidnapped on Monday by a neighbor. She was discovered after a neighbor heard crying and called the authorities. She was admitted with injuries to her face and chest wall, and bruises on her neck that could indicate strangulation.

Protests have erupted outside the hospital in response to the assault. Since the brutal gang rape and death of a 23-year-old female medical student in India, protests have been sparked across India, the world’s largest democracy, where a woman is estimated to be raped every twenty minutes, with Delhi being labeled the “rape capital” of the country, according to the Associated Press. Huge protests and demonstrations have voiced anger regarding the treatment of women in India and calling for tougher laws on violence against women.

Fabric texture of the flag of India from Shutterstock