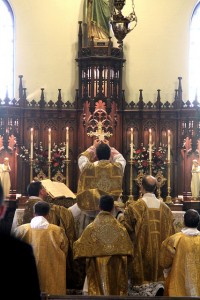 Since the end of last month, the U.S. Conference of Catholic Bishops have been busy rallying up their base to come out and defend their “religious liberty.” A series of events, spanning over two weeks and dubbed the ‘Fortnight of Freedom,” were planned and publicized to parishes and diocese across the US in an attempt to add fuel to their ongoing campaign to prohibit women from having any control over their reproduction. Suffice to say, things did not go as well as they hoped:

…This extravaganza was supposed to redefine the political conversation, but instead it went mostly unnoticed and unattended. It was supposed to show massive grassroots support for the bishops’ contention that allowing women to purchase comprehensive health insurance constitutes an intolerable threat to the religious liberty of employers who wish to prohibit that. But instead it showed, definitively, that there is no grassroots support for that strange argument. The bishops declared themselves the grand marshals of what was to be a glorious parade, but no one showed up to march behind them and only a meager handful turned out to line the route as spectators.

The low turnout speaks volumes for not only how out of touch the bishops are, but also exposes the little support they have from their own base when it comes to politicizing women’s health. It also shows that the Bishops’ fraud messaging is not working. Americans are not stupid and neither are women. By stating that Catholic institutions have the right to religious liberty and to thereby not include birth control in their employees or students’ health insurance plans, they are denying that very same religious freedom to their employees and students. The only thing the bishops managed to show was their lack of concern for women’s religious liberty, choices, and lives. At the end of the day, the Supreme Court upheld what the bishops claimed to be a “threat to religious liberty, AKA the Affordable Care Act.

In his article, “Let’s Celebrate Real Religious Freedom,” President of Catholics for Choice, Jon O’Brien lists real examples of religious persecution, from the European Jews to Catholics in Ireland to Bahais in Iran, calling out the bishops for trying to victimize themselves by trying to include themselves in this list:

Today’s American Catholic bishops would have us think they are the latest victims of religious persecution. Their claims denigrate the suffering of those who know the true meaning of that term. A few powerful conservative religious leaders, not joined by the majority of their faith or even of all their fellow bishops, have opened their coffers to sue the government to allow them to force others to live by their rules and to deny them what everyone else is guaranteed by our society. This isn’t about religious liberty. It’s a sham. And a dangerous one.

O’Brien goes on to state that the bishops have already failed. They did not succeed in making Catholics in 2012 believe that using birth control is a moral offense, so instead they decided to attack a law that gives all Americans health insurance.

Ironically, a rally to display the strength of the bishops ended up being a huge public relations disaster. If there is one thing we can take away from the “Fortnight of Freedom” is that bishops are out of touch with their own base, who by not coming out in huge numbers to support the U.S. Conference of Catholic Bishops have shown everybody how badly their messaging is failing.