“The weather shall not daunt us. We are going to Albany, and the road lies ahead.”

Thus did “General” Rosalie Jones rally her troops during Day Three of the “suffrage army’s” march. Due to a long-standing engagement in New York City, Chief Orator Jessie Hardy Stubbs was on leave for the day, and “Private” Alice Clark had to go back to her regular job, but “General” Jones, “Colonel” Craft and “Surgeon-General” Dock kept up the brisk pace set on the first two days of the hike.

The morning began in drizzle, then deteriorated into very thick fog. But as in the battle for woman suffrage itself, slow and steady progress continued to be made toward their objective, which today was the portion of the hike from Ossining to Peekskill. “Votes for Women!” was the shout of Surgeon-General Dock, then despite some obvious foot sensitivities brought on by the first two days of marching, off went the hikers. Their loyal pack of “War Correspondents” followed closely behind, reporting each day’s events to the eager readers of their respective newspapers.

Emma Barton waved greetings as the hikers passed her house in Crotona, and after quickly being given a membership application by Colonel Craft, she signed up to join one of the sponsoring suffrage organizations. Postmaster Ezra Ferris was Crotona’s official greeter. He was accompanied by Charles Chase, whose optimistic prediction that his 4-year-old twin daughters would vote when they turned 21 was a welcome reassurance that it isn’t only the most dedicated suffragists who believe that the campaign for the winning of the ballot has now passed the point of inevitability. 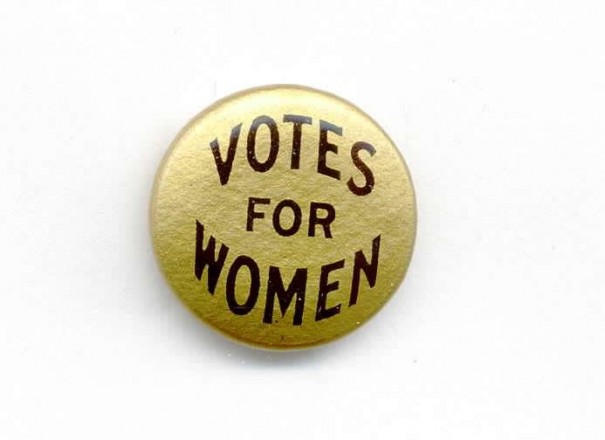 Farther on, Paul Stier and daughter encountered the marchers, and when Mr. Stier expressed his strong support for suffrage, he got a pat on the back from his daughter, who remarked: “He’s just grand,” a sentiment endorsed by all. Of course, not all fellow-travelers on the road to Peekskill were so enthusiastic.

One man in a wagon drawn by a team of horses said he supported woman suffrage “sometimes,” when stopped and questioned by General Jones. But the next encounter was more positive, when a man offered to give a marcher a ride in a wheelbarrow, logically assuming “you must be tired of walking.”

The marchers attracted attention everywhere they went, and anyone who looked even mildly supportive was given literature and membership applications by Colonel Craft. Finally, Peekskill approached, and a delegation from the local suffrage group came out to greet the marchers and escort them the last two and a half miles to the Raleigh Hotel. A crowd awaited them there, which included many of the town’s most prominent citizens. Even the police officer in charge assured the women that he was pro-suffrage. Though undoubtedly in need of rest and sleep, now 42 miles and three days out of New York City, all three troopers still reported for duty later in the evening when it was time for a suffrage rally at the Colonial Theater.

Tomorrow, with the expected return of Jessie Hardy Stubbs boosting the strength of the legion to four, it will be time to move out again, and the day’s objective will be to make as many converts to the cause as possible on the road to Fishkill.