Though the weather was quite unfriendly on Day Four of the hike, the people along this part of the route from New York City to Albany were just the opposite, and because yesterday’s thick fog was absent, views of the Hudson River and Storm King Mountain were spectacular. After a dispatch was sent from General Jones to a National American Woman Suffrage Association meeting in Chicago, reporting on the pilgrims’ progress, the day’s hike began with all four hikers giving a rousing cheer, echoed by a number of Peekskill’s residents.

Early on, the marchers were rewarded by an encounter with a mother and her three-year-old boy, Harold Traudt, whose attire included red, white and blue bunting. Both generations were strongly pro-suffrage. When asked, “You will vote with us when you grow up?” the boy said, “Yes, ma’am” and was given three cheers by the hikers. They then dropped in – unannounced – on a little red schoolhouse, and though the teacher, Florence Boggs, was firmly anti-suffrage, the students were having such a good time talking to the hikers that she chose not to interfere, and even promised to read some of the literature dropped off by the marchers.

Florence M. Cooley, of the Women’s Political League, appeared as promised when the troops crossed the Putnam County Line, and became just the first of their many cross-county escorts. The improving weather she brought with her was certainly welcome, and the muddy road even began to dry out a bit. The hikers took a nice break about noon to admire the view of West Point. Two more Putnam County suffragists, Lillian Jackson and Anna McKeller, also greeted the hikers and invited them to a luncheon. 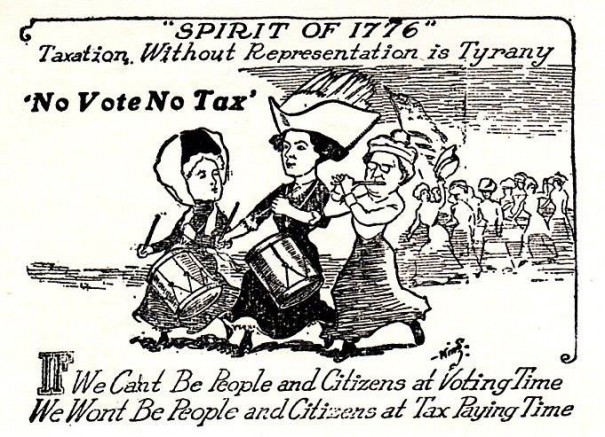 At the entrance to an aqueduct tunnel, some workers shouted their encouragement, with “Votes for Women!” the speedy reply. That was followed immediately by a salute from the plant’s whistles. Then a boat carrying other workers across the Hudson tooted its whistle for the marchers as well, and fatigue among the hikers seemed to temporarily subside.

Darkness began to fall well before Fishkill was reached, but the locals had no trouble escorting the hikers directly to the Holland Hotel. The day’s objective was taken, though General Jones was tottering a bit at the end. She had begun limping slightly near Cold Spring, and went straight to bed at the first opportunity.

At the official welcoming ceremonies, Fishkill’s President happily surrendered the key to the town to the invading army. As usual, the indefatigable “Captain” (and Chief Orator) Jessie Hardy Stubbs managed to find another evening audience to speak to as well, and gave “Votes for Women” buttons to the men attending the anniversary dinner of the Tompkins Hose Association, a group of local firefighters.

Tomorrow it’s on to Wappingers Falls, and the question of the day will be whether the suffrage pilgrims, having already marched 64 miles in four days, will be waltzing at the local dance there tomorrow night.