The treatment of women by the criminal justice system was denounced today by Louise De Koven Bowen on the fourth day of the National American Woman Suffrage Association’s week-long annual convention. 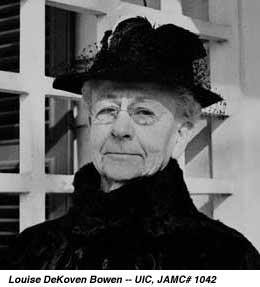 A close friend of Jane Addams, and Treasurer of Hull House, in Chicago, Bowen pointed out a lack of women police officers and women jurors, then called for reform of the courts and prisons to help women and children caught up in the system:

From the time of the arrest of a woman to the final disposition of her case she is handicapped by being in charge of and surrounded by men, who naturally cannot be expected to be as sympathetic and understanding as one of her own sex.

In the police station she is at a disadvantage, for such places of detention in most of our large cities are not fit for human habitation. When she appears for her preliminary hearing she is tousled and untidy as a result of being without proper toilet accommodations, and is therefore apt to create an unfavorable impression. In all police stations separate rooms or cells should be provided with plenty of light and air and sleeping and toilet accommodations for the women.

(Women cannot serve on juries in Illinois, and although Chicago has had a female police officer – Marie Owens – since 1891, and 10 more were sworn in earlier this year, this is hardly a sufficient presence in a force of 4,000 officers. The rest of the criminal “justice” system is similarly male-dominated.)

Hopes for a spirit of friendly cooperation between the National American Woman Suffrage Association and President Wilson have suffered a major setback. N.A.W.S.A. President Rev. Anna Howard Shaw expressed the indignation felt by all convention delegates when she denounced the President for ignoring woman suffrage in his message to Congress today:

President Wilson referred in his message to the fact that the time had come for an extension of greater social justice, and we women eagerly listened to this. We had hoped that social justice would include some measure of political justice to the women of the country. I feel fully that measure of disappointment which under the circumstances is natural, for the time had come for the President to say a word in our behalf.

No other President has ever had such an opportunity. President Wilson had the opportunity of speaking a word which might ultimately lead to the enfranchisement of a large part of the human family.

I feel that I must make this statement as broad as it is for the reason that we at Budapest last year realized that womankind throughout the world looked to the United States to blaze the way for the extension of universal suffrage in every quarter of this great globe. President Wilson has missed the one thing that might have made it possible for him never to have been forgotten. I am saying this on behalf of myself and my fellow officers.

After enthusiastic applause, the convention adopted this resolution by acclimation: “That it is the sense of this meeting that President Wilson failed to rise to the sublimest of heights of democracy when he failed in his message to Congress today to recommend the freedom of half the citizens of the civilized world.”

Though it had been hoped the new President would be sufficiently astute to jump on the suffrage bandwagon now that the campaign has become so much more of a political force than it was just a few years ago, efforts to get him to enthusiastically support the cause will go on. But with or without his support, the feeling at the convention is that the final phase of the campaign has already begun, and will end with the Susan B. Anthony (nationwide woman suffrage) Amendment in the Constitution before many more years pass.