This was an eventful, but exhausting, 27-mile second day of the Newark, New Jersey, to Washington, D.C., suffrage hike by “General” Rosalie Jones and her “Army of the Hudson.”

Though appreciative of temperatures that are no longer near the zero mark as they were yesterday, warmer weather has caused problems of its own. Melting snow and ice made going any distance through slush and water difficult on the already poor roads. But even so, when the army finally pulled into Princeton, thirteen of the original sixteen troops were still in the ranks and intent on finishing the hike.

The hikers started this morning from Metuchen, New Jersey, and after a luncheon in their honor at the Hotel Klein in New Brunswick, they approached Rutgers College. Some students spotted and then surrounded Olive Schultz in the advance scout car. When one yelled: “General Jones is coming!” the rest of the students, many in cadet uniforms, formed a single-file line when a student leader said “Fall in!” They then lock-stepped out to meet her.

The students gave the General and her troops a slightly modified version of a traditional school yell (“Rah, Bow-Wow-Wow; Rah, Bow-Wow-Wow; Rutgers, suffragettes, Bow-Wow-Wow Rutgers!”) as the two armies marched together across the campus. Students then demanded a speech, which General Jones happily gave. It was accompanied by even more cheers. The atmosphere was so supportive that when she was introduced to the college president, General Jones pinned a suffrage button on his coat.

There was a brief, unplanned stop on the way to Princeton, the final destination of the day. What looked like a woman wearing a bonnet was spotted far out in a field, and Elizabeth Aldrich decided to see if she could be converted to the cause. Not until Aldrich had gone over a fence and some distance into the field was it discovered that the effort was doomed to failure, because scarecrows are universally neutral on all issues. Unfortunately, this was far from the biggest error of the day. Thanks to a wrong turn, a 20-mile hike became a 27-mile trek. 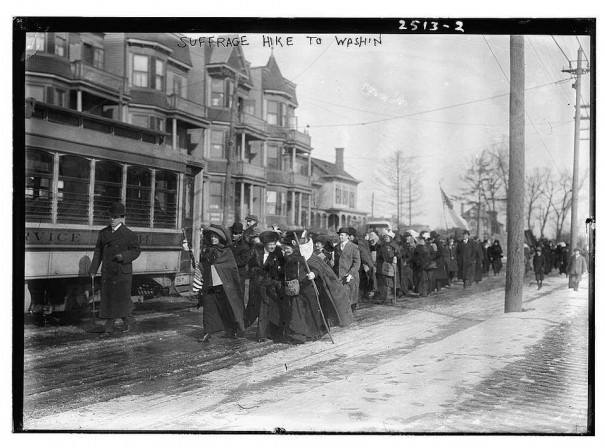 But despite the difficulties encountered along the way, the hikers’ arrival in Princeton was well worth the effort. In fact, the welcome was a bit too enthusiastic for Mary Boldt, the first to come into town, well ahead of the others. Several hundred very boisterous students suddenly rushed out to meet her, surrounded her, then picked her up and began to carry her around, much to her confusion and dismay.

The reception for the rest of the hikers, who arrived about 7:00, was equally supportive, but a bit more restrained after the earlier incident. Speeches were made by the army’s senior officers to a crowd of students that swelled to 500, with college yells and applause being heard until well after 9:00.

The pace of the hike is taking its toll, but the undaunted spirit of the troops was best exemplified today by “Corporal” Martha Klatchken. She was in a state of near exhaustion when she arrived an hour after the first hikers, but has absolutely refused all offers of a lift from passing drivers. Instead, she leans, when necessary, on another hiker. Everyone will rest well tonight, and be off for Trenton tomorrow.