The suffragist “Army of the Hudson” continues its advance on Washington, D.C., hiking from Princeton to Trenton, New Jersey, today.

The troops have now covered 53 miles in just three days since leaving Newark.

“Our feet may be sore, but they are not cold and every one of us will stick it out to Washington,” declared “General” Rosalie Jones, as she, the other full-time hikers, plus Elizabeth Freeman in the literature (“ammunition”) wagon, pulled by Lausanne, the $59.98 suffrage horse, and Olive Schultz, ahead in the scout car, all left Princeton this morning.

The pilgrims were accompanied to the edge of town by a crowd of several hundred Princeton students. These were probably the same ones who greeted the hikers so enthusiastically yesterday, and gave them little sleep last night as they cheered outside the hikers’ hotel until quite late. While on the road to Trenton, the Princeton boys were replaced by some Lawrenceville Academy lads who marched along for a while carrying a large “Votes for Women” banner and cheering “Sis boom ah! Sis boom bah! Coo, Coo suffragettes!”

While the hikers were preoccupied with making speeches to the main body of Lawrenceville students, a small group of boys quietly borrowed the “ammunition wagon” and drove around with it for about 10 minutes. But it was returned unharmed and still well-stockpiled with suffrage brochures, so no harm done.

Upon arrival in Trenton, police officers on bicycles joined the pilgrims as they went through town. The little parade was cheered by crowds along the sidewalks as the troops made their way to the Trenton Hotel. There the hikers found many Valentines waiting for them from admirers who had read in the newspapers of their journey. (There is a contingent of “war correspondents” along for the trip sending daily reports back to their papers, so this tiny band is getting nationwide publicity.)

Of course, 53 miles in 3 days is hard on the feet, and hardest of all on those of “Corporal” Klatchken. She was already hobbling a bit yesterday, but despite her blistered feet, is still refusing to accept any rides, and was voted “pluckiest of all” by the troops tonight.

Since the march was going through Princeton, it seemed only appropriate that General Jones send greetings to its most famous resident. Though President-elect Wilson was in Philadelphia today, a letter was delivered to his home by Mary Boldt, accompanied by bugler George Wend, several other hikers, and a number of Princeton students. The letter said:

A small band of votes-for-women pilgrims from the States of New York, New Jersey, Pennsylvania, Delaware, Maryland, Virginia and Ohio earnestly request of you an audience for not more than two minutes in Washington as soon after your arrival as possible. They desire to present a message to you.

Thanking you in advance for your courtesy, I am, very sincerely,

After arriving in Trenton, Jones and her army joined in a previously scheduled rally in favor of amending the New Jersey Constitution to authorize women to vote. This was followed by a banquet in the hikers’ honor, and finally an evening at the theater, where General Jones and Elizabeth Freeman were invited to make speeches between the acts. 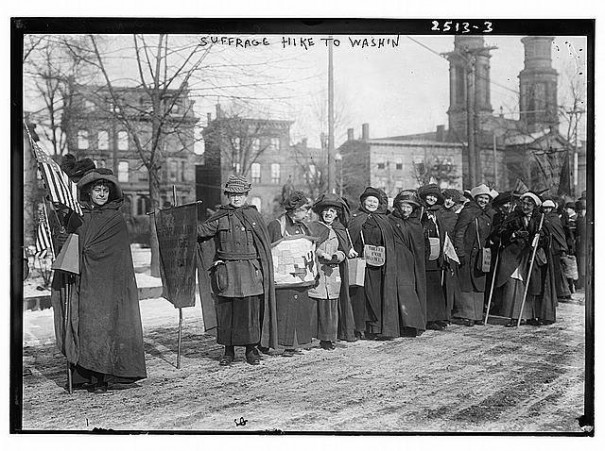 One of the evening’s major events occurred back in Princeton, however. Mary Boldt, who had arrived there well ahead of the other hikers last night, had been somewhat taken aback by the unexpected and overenthusiastic welcome given her by a large and boisterous crowd of Princeton students. Since there were conflicting reports circulating around the campus today about the incident and her reaction to it, she motored back from Trenton to reassure the students that she held them in high esteem, and appreciated their enthusiasm.

Apparently, the admiration felt by Boldt for the students was mutual. They gave her another rally, and when she auctioned off her pilgrim’s cloak for the cause, it was cut into strips that the students pinned to their lapels as a sign of support and affection. There was also a brisk business in ten-cent postcard photos of her. Then, there was one final – and much appreciated – show of support. When the automobile carrying Boldt back to Trenton broke down after half a mile, all the boys ran to her aid, then pushed the auto back into town, where it was fixed, so she was able to finish her return trip back to the army’s temporary barracks at the Trenton Hotel. Tomorrow, on to Burlington!