The end of the trail and a spectacular entry into Washington, D.C., today for the suffrage hikers!

After 17 days of marching over mostly muddy roads between here and Newark, New Jersey, and encountering everything from snowstorms to hostile hecklers, “General” Rosalie Jones and her suffragist “Army of the Hudson” strode triumphantly into Washington, D.C., this morning to a spontaneous and exuberant reception by thousands of cheering Washingtonians.

Not long after entering the city, enthusiastic crowds began following the hikers. Even the police were unable to prevent the throngs from leaving the sidewalks and flooding the streets when the marchers turned down Pennsylvania Avenue on their way to the recently opened headquarters of the National American Woman Suffrage Association’s Congressional Committee, at 1420 “F” Street, N.W.

Always able to overcome any obstacle in their path, the hikers changed from a line of 13 who had walked every step, followed by a line of those who had walked part way, into a column of twos with arms locked together, moving forward whenever the police could clear a small space for them to advance. Everyone wanted to salute and congratulate the pilgrims in whatever way they could, so automobile horns, whistles, and shouts mixed together in a din that must have seemed quite a change from so many days of walking the lonely roads of rural New Jersey, Pennsylvania, Delaware and Maryland.

Finally the troops reached suffrage headquarters, and General Jones addressed the cheering crowd through a megaphone before the hikers dispersed for a change of clothes, some rest, and numerous events in their honor. Among the listeners to Gen. Jones’ speech was her mother. Though a known anti-suffragist, she smiled a number of times, and seemed to take pride in her daughter’s feat, if not her objective.

To make the day still better, even the dispute over the letter from prominent suffragists to President-elect Wilson seems to have become somewhat defused. When the National Board of the National American Woman Suffrage Association told General Jones to hand over the letter she’d been carrying so that the Board members and N.A.W.S.A.’s Congressional Committee could deliver it to Wilson themselves, their edict caused understandable shock and resentment on the part of General Jones and her troops. 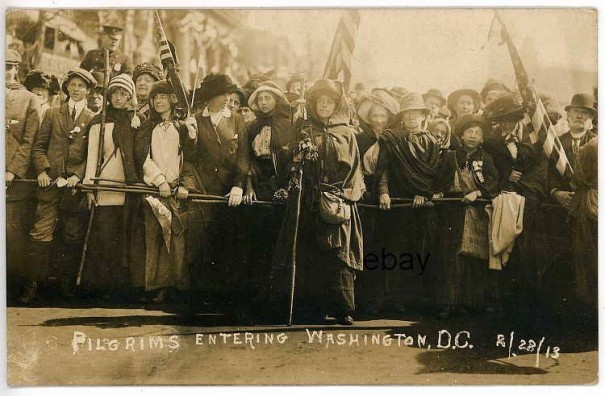 But the day began with a telegram which said: “Regret misunderstanding. Board with you from beginning. Delegation to present letter to consist of national officers, Congressional Committee and pilgrims, if interview with Wilson is arranged.” It was noted that the “pilgrims” were mentioned last, despite having been the ones who had actually carried the message to D.C., but at least General Jones and her loyal band of hikers are assured of being part of an audience with the incoming Chief Executive should such an event occur.

Jones’ attendance, of course, would require her to accompany the N.A.W.S.A. officers to the meeting, something she is not presently inclined to do so soon after the totally unexpected confrontation. However, Alice Paul, head of N.A.W.S.A.’s Congressional Committee, seems to want to restore good relations, and personally praised the marchers: “We are doing all that we can to entertain the women, and I can assure you that we do appreciate the wonderful walk that they have made, and the great aid they have given the cause by their efforts and bravery.”

That the hikers have greatly advanced “the cause” was an overwhelming consensus here today. Though a massive parade and pageant featuring thousands of suffragists and coordinated by N.A.W.S.A. three days from now will be a far larger event, the impact made by General Jones’ small band has already made it clear that this is a new era in the suffrage movement.

Sixty-five years have gone by since winning the vote was adopted as a goal of those attending the first women’s rights convention at Seneca Falls, New York, in 1848. But the realization of their goal now seems only a small fraction of that time in the future thanks to bolder tactics by some of the younger suffragists and the emergence of newer organizations, plus imaginative ideas by dedicated suffragists like Rosalie Jones and her hardy band of hikers.